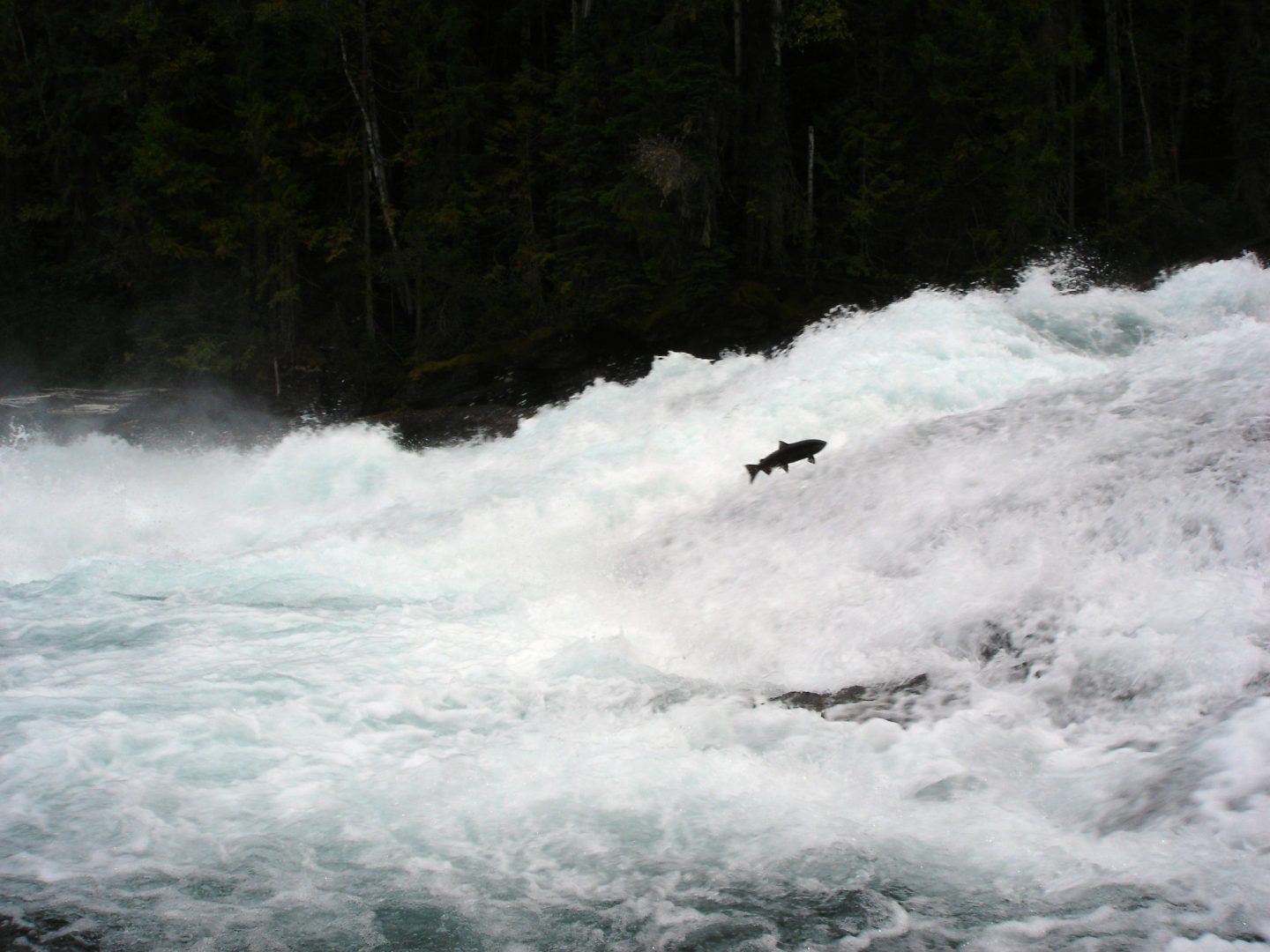 Only a few kilometers from my family home, in Prince Rupert, British Columbia, lies the mouth of the Skeena River.  The Skeena River is a world renowned location for salmon fishing, and is in fact it where Canada’s second largest salmon runoccurs.  Nearly 200 million salmon pass through this region each year.  The Skeena is a massive river with many tributaries which are used by many species of salmon as their breeding grounds (fun fact: The Pacific Ocean has six species of salmon).  The mouth of the Skeena is a geographical bottleneck along the salmon’s migratory routes.  It is also the location of two proposed liquid natural gas (LNG) export sites, which has become a fiercely debated topic over the past few years.  There are many issues surrounding the potential effects that LNG plant development could have on the Skeena watershed. What I will focus on is some of the conservation issues surrounding the LNG developments with respect to how they may alter the behaviour of salmon in this ecologically important region.  Specifically the effects it may have on the migration of both juvenile and adult salmon, and in turn, the greater outreaching effects this may have on the Skeena watershed. 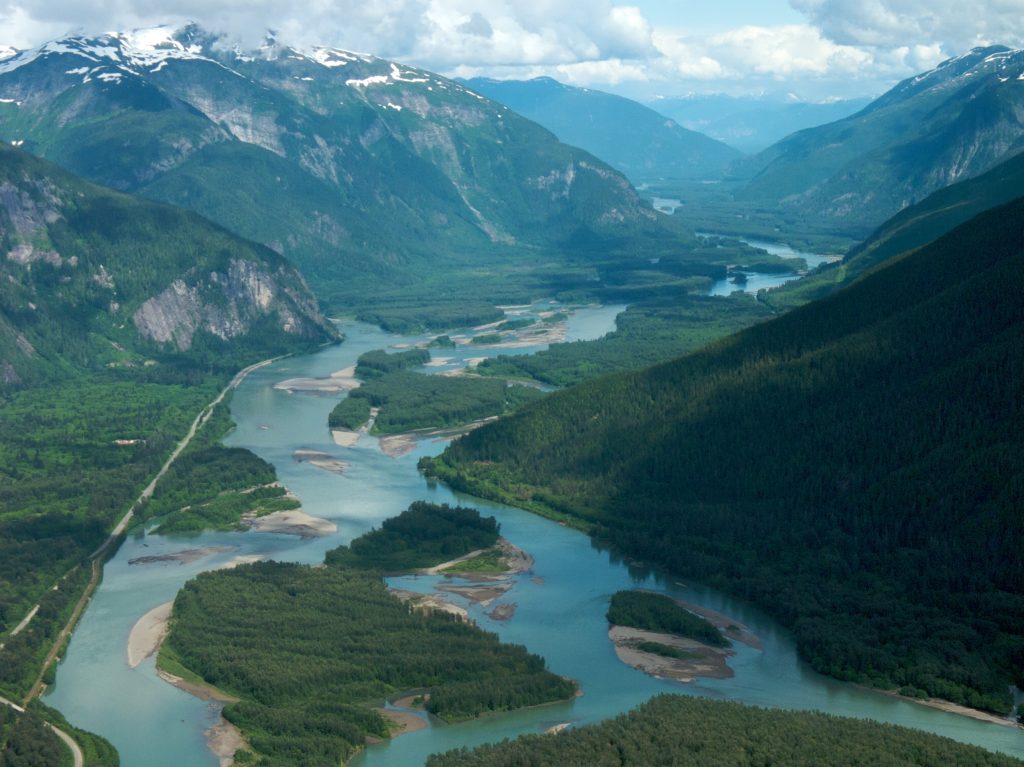 (Scenic view of the Skeena River)

The estuary where the Skeena River meets the Pacific Ocean is absolutely massive, and it is arguably the most important section along the migration routes of both young salmon journeying to the ocean, and adult salmon making the journey to their mating grounds.  The estuary contains many shallow channels and underwater fields of eelgrass, all of which are critical for young salmon to gradually adjust from the fresh water of the Skeena, to the Pacific’s salty waters.  How could the development of LNG terminals disrupt this region for the young salmon?  The construction of the terminals would require massive amounts of dredging, resulting in the reduction of eelgrass beds and the shallow channels which the young salmon rely on.  Without these regions to rest, the salmon would be forced to continue out towards the Pacific, exposing them to hypertonic conditions without time to sufficiently adjust to this environment.  In past courses I have learned that rapidly undergoing the fresh to salt water transition puts high levels of stress on the salmon.

Being forced to migrate out to the Pacific faster may have several potential consequences on the salmon population and the ecosystem as a whole.  The stress caused by this rapid transition would likely result in a selective pressure that gives young salmon that are able to rapidly adjust to the salt water a fitness advantage.  Over time as the young salmon spend less time in the estuary this could have outreaching effects on many of the species that depend on the salmon.  Predators which feed on the salmon may have less time to benefit from this food source, which in turn may force them to seek out alternative food sources earlier than normal.  The alteration of the salmon’s migration may alter the foraging behaviour of its predators.  Additionally, making the transition to the ocean faster may have detrimental effects on the salmon, even if they are able to adequately adjust to the salty environment.  Moving to the ocean sooner, likely means they will be smaller, as they have has less time to feed and develop in the river.  These smaller salmon may be less able to evade predation by larger fish.  The combined result is less salmon surviving the transition from river to ocean, and less salmon surviving their time in the ocean, potentially leading to the collapse of the salmon run. 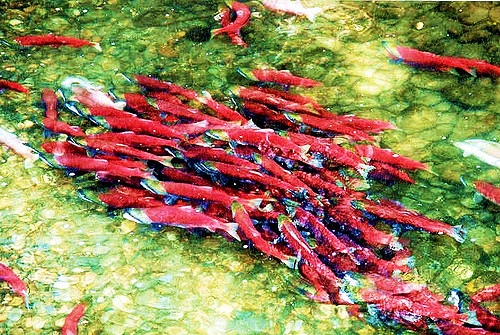 Now let’s discuss the potential impacts LNG developments could have on the adult salmon.  As previously stated, the entrance to the Skeena is a geographical bottleneck, a narrow region where many species of salmon must pass through to eventually reach their breeding grounds.  One major concern is the effect noise will have on the migrating salmon populations.  With a constant influx of tankers, and the location of the LNG developments directly along the migration routes, it is feared that the constant noise produced by the tankers will deter the salmon from approaching the estuary to continue their journey up the Skeena.  Again, this has potentially far reaching effects.  One, the noise pollution may result in less salmon successfully making their migration to the mating grounds, along with less salmon even attempting the migration.  The potential effects directly on the salmon, as a result of their altered behavior, is less salmon making it to the breeding grounds, and therefore less salmon reproducing which could drastically reduce an already low number of salmon making the migration run each year.  This also has the potential to greatly affect several species which rely on the salmon runs.  An obvious example of this would be with bears.  It is well known that bears rely on the migrating adult salmon to fatten up, preparing them for hibernation.  The collapse of the salmon run would result in the elimination of a primary food source for bears, and any other species that depend on this to prepare for the winter months.  The collapse of the Skeena salmon run has the potential to have far reaching effects on the entire northwest ecosystem surrounding the Skeena River. 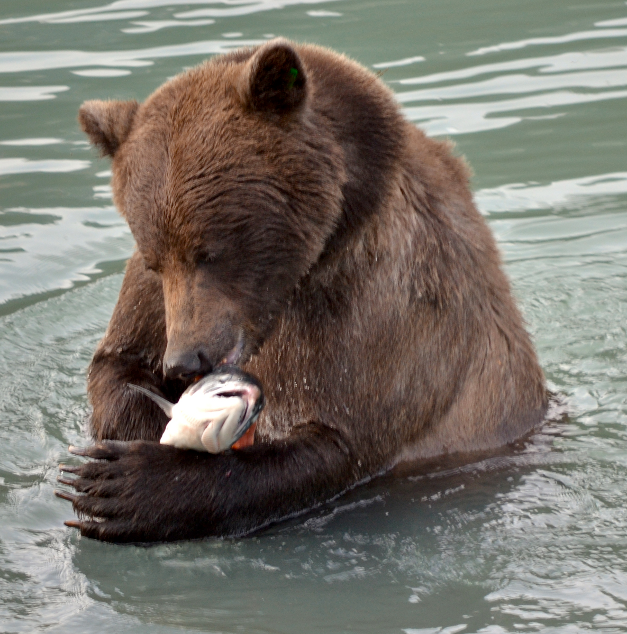 (Have you ever seen a more terrified looking fish?)

While industrial development on any coast line carries risks, it is my firm opinion that some environments are far too pristine and important to take any risks.  In a location such as the Skeena River, the benefits of LNG development are outweighed by the environmental and conservational risks.  From altering salmon migration, to pollution, to disturbances in the food chain; the list of risks exceeds the benefits.  The Skeena salmon, although it is Canada’s second largest, has had concurringly low numbers in recent years.  The two days of marine travel time saved by building a port in the Prince Rupert area may make sense from a business stand point, but as scientists, we must emphasize that there is no economy without a healthy ecosystem.  Sometimes the most important conservation issues are ones that have not become an issue yet.  In the case of the LNG export sites, the risk they pose to the Skeena River is a risk that I hope never come to reality.

"If a man fails to honor the rivers, he shall not gain the life from them" -Anonymous

THE AMERICAN CROW: LIFE OF AN OPPORTUNIST