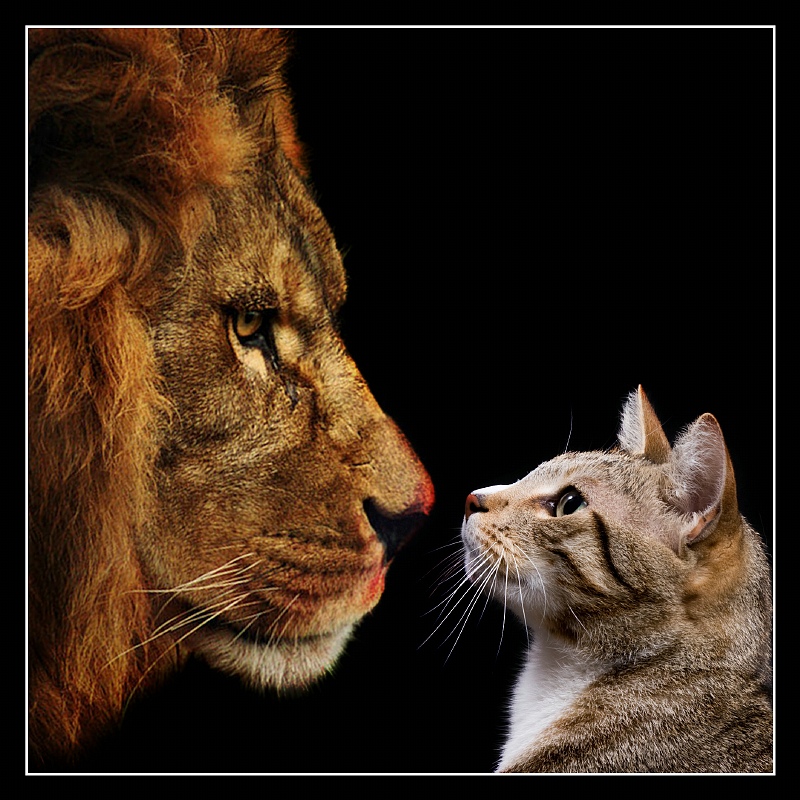 The lion (Panthera leo) is one of the most renowned cat species on earth; with highly distinguishable physical and behavioural characteristics such as its large size, recognizable mane, and social hunting techniques. Despite its charismatic reputation, lions are facing multiple pressures that continue to decrease population sizes. In 2015, the last 21 years had experienced a population decline of 43%, contributing to the International Union for Conservation of Nature (IUCN) listing the lion as a vulnerable species (Bauer et al. 2015). The most pressing threats facing this species are mortality from humans defending themselves or their livestock, habitat loss, prey depletion, and poaching of prey species (Nowell and Jackson 1996). With such a variety of threats facing this species, it is not surprising that there are almost three times more lions in captivity than in the wild (Dzimwasha 2015). I spent a half hour observing three lions at the Smithsonian National Zoological Park for Conservation Biology 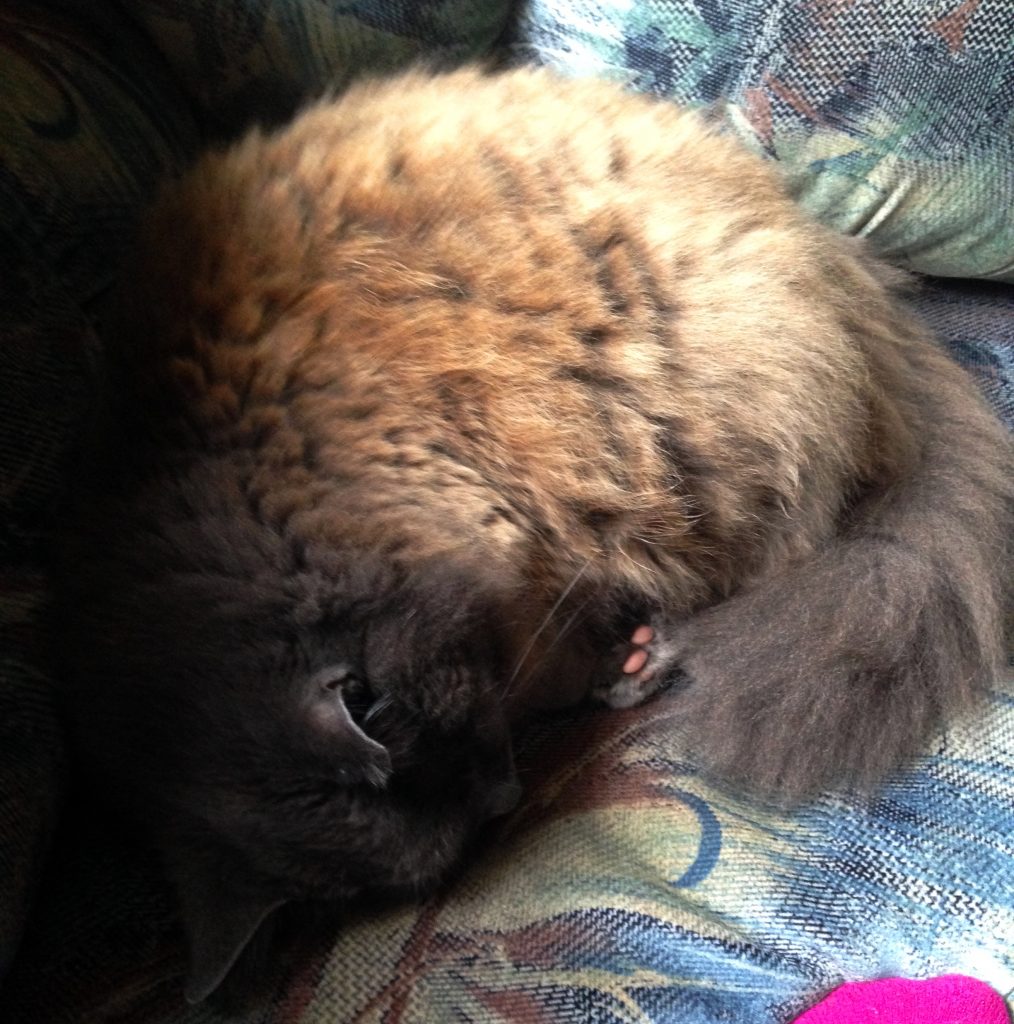 Despite human attraction to the lion and its magnificent characteristics, a close relative- the domestic cat (Felis catus), may just claim the title of most loved feline worldwide.  The domestic cat has been a close companion to humans for centuries, and continues to be tied to human camaraderie within current society.  In 2014, there were more than 7 million pet cats within Canada (CAHI 2015). The domestic cat and the lion were once linked through a common ancestor just 10-15 million years ago, yet much diversification has occurred since this time (Johnson and O’Brien 1997). To contrast domesticated feline behaviour to captive “wild” feline behaviour I spent another half hour watching my personal house cat on the same day that I observed the lions.

Popularity Score:   Leo-8, Catus-10! …It’s hard to argue this one folks when there are 7 million cats in Canada alone!

My cat’s actions can be summed up in one word: sleep. My cat spent 30+ minutes with her face in the couch and only moved twice during that time: once to shift weight to sleep on the opposite side, and then once again to sleep on the original side.

In comparison, the three lions I observed also rested quite a bit, but also interacted with each other and moved much more than my cat. When I began watching the lions they spent the first 10 minutes just walking around in their enclosure. They walked independently from one another, and at a slow and steady pace. During this time the lions did not interact with one another or seem to acknowledge each other’s’ presence.  After about 10 minutes, one lion was interrupted during his walk as a different lion ran up to the first and tackled his head in a playful and non-aggressive manner. The first lion did not react to this encounter and the walking resumed. At around the 15 minute mark, the lions altered between walking and laying down in a rest position. One lion would lay for a few minutes, get up, walk a bit, and then lay down again. The most interesting thing I witnessed was that during this time one lion was laying down and a second lion spotted the first from a slight distance, crouched and waited for a few seconds, and pounced across the enclosure to the first lion. The second lion then proceeded to sit on a ledge just above the first, and stroked its paw against the first lions head. I found this fascinating because the second lion looked like it was literally petting the first (as a human would pet a cat or dog).  After this interaction, all lions regained a rest position and did not move until the last 5 minutes of observation.  At this time one lion stood up, walked to another lion, and laid down behind it so that their bodies were touching; a nice lion cuddle to sum up the observation period.

Behaviour Score: Leo-8, Catus-2…While the lions spent a lot of time resting, they also displayed some very distinct behaviour!! Catus on the other hand is just earning pity marks at this point….

Bashaw et al. (2007) explains that captive lions spend majority of their time pacing and sleeping. This can be an indicator of stress and negative well-being within these individuals and suggests that there are abnormalities between species-environment interactions (Broom 1991; Carlstead 1998). This is a logical use of energy because lions in captivity do not encounter challenges like they do within the wild. They do not have to hunt for food or find water, they do not have to seek shade or travel long distances; reproductive efforts are also decreased in captivity. Not having to budget energy for these activities leaves a lot of extra time and energy that can manifest in negative ways: pacing being one example.

I would hypothesize that the interactions I observed among lion pairs were forms of social play. The behaviours did not contain indicators of aggression (no growling, teeth bared, hair standing on end etc.) and also did not seem to provide a biological advantage (resources were not gained, reproduction was not attempted). The playful behaviour witnessed may have been another outlet for a surplus of energy. Again, not having to hunt or search for resources allows extra energy for individuals, which may manifest as play behaviours. This would be a more positive use of surplus energy instead of pacing, and may even decrease the likelihood of boredom and the development of repetitive behaviours.

Another explanation for playful behaviours is simply the desire for pleasure or enjoyment (Beach 1945). The lions may find enjoyment in being active, and may be expressing this as play among individuals.  However, one amusing point is that the play interest exhibited by one lion was not matched by the second lion. In most of the play interactions, the second lion remained indifferent about the situation but did not reciprocate in a desire to play itself. Perhaps the second lion did not have as much surplus energy at that time, or the second lion could have even been older than the first and not as interested in play (Beach (1945) suggests younger individuals are more prone to play than older individuals).

The final behavioural act was the lion cuddle. As lions are highly social creatures, it would not surprise me that lions may participate in acts of bonding within the pride.  Social relationships can be used to maintain bonds with other individuals, reduce stress, and/or express dominance and submission among the group (Matoba et al. 2013). The most common of these behaviours are head rubbing and licking, but I think it would be possible to create bonds by simple close contact. The lion cuddle may have just been a way to keep warm, but may also be an expression of social bonding among the captive group. Whoa! It’s looking pretty good for Leo, there seems to be a lot of possibilities for the behaviours witnessed!

Back to Catus for a moment…can she pull off enough points to make this competition worth it?!

Turner (2000) demonstrates that domestic cats are highly adaptable to their environments: some may spend majority of the day while others may not leave their sleeping spot. As my cat seems to have embraced the latter option to its fullest, there are limited comparisons that can be drawn from my cat and the lion observations. One thing I did notice is that my cat sleeps on its head (with the face curdled inwards towards the body), and when the lions were at rest their heads were still upright. 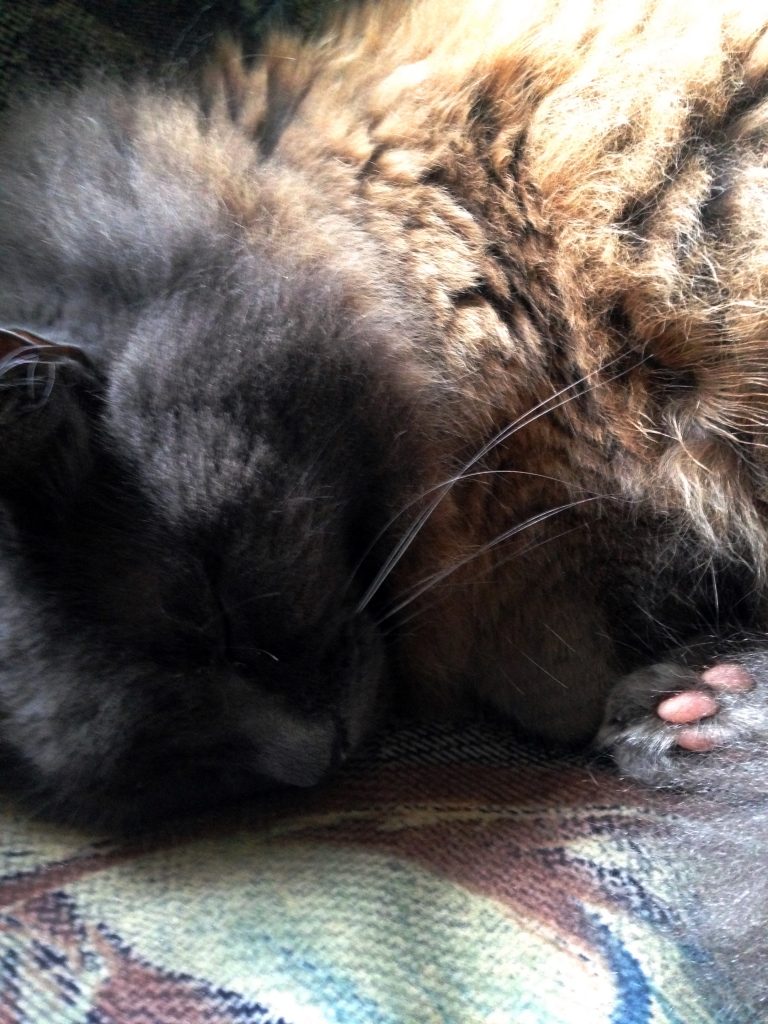 I would hypothesize that this has to do with opportunity costs and resource availability. My cat knows that our house is a safe place; there is always food, and no one has ever hurt her. The lions however may be different. They instinctively know that they need to hunt for food, and to be on the lookout for other individuals that mean to challenge them or bring them harm. Even though the lions I witnessed were in captivity and do not have to worry about how to get their next meal, just a few generations prior would have faced these challenges on a daily basis. In contrast, my cat’s history has been filled with generations and generations of house cats that have come to rely on humans for the resources they need. Generations of security, coupled with a lifetime of reassurance, means that my cat has no fear in tucking her head into her body. She doesn’t need to be able to look around quickly and she ignores most sounds she hears. The lions however cannot afford this luxury.  They need to be able to look around quickly and keep their ears and eyes open to detect movement.  If they were to disappear within their fur when resting, they could miss opportunities to see prey or detect potential trouble. Although this idea may be a slight stretch, I think that domestication could have huge implications on feline behaviour and I would be interested in investigating the effects of human dependence on biological processes such as feeding and defense.

Even during Catus’ diagnosis Leo made a large appearance!! Extra points to Leo!

Not quite the nail-biting competition we expected here today, unfortunately Catus just couldn’t find her stride! Based on these scores you have to wonder how there are 7 million cats in Canada yet not even 20 000 lions total….

Tune in next week when we pit everyone’s favourite primate: Homo sapiens, against their near cousin the banana! (They share 50% DNA didn’t you know)

Bashaw, M.J., Kelling, A.S., Bloomsmith, M.A., Maple, T.L. 2007. Environmental effects on the behaviour of zoo-housed lions and tigers, with a case study of the effects of a visual barrier on pacing. Journal of Applied Animal Welfare Science. 10(2): 95-109.

Turner, D.C. 2000. The domestic cat: the biology of its behaviour. Cambridge University Press

This work by Hayley Scott is licensed under a Creative Commons CC-BY Attribution 4.0 International License.