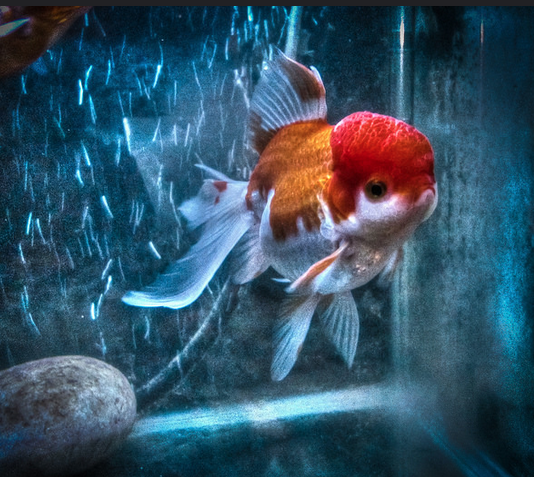 Imagine this: You’re sitting in the Peer Support Network (PSN) on campus wondering which critter to observe for your blog post. You continue to sit there mulling over your options which range from tromping about outside praying to find a cooperative bird or going home to take scrupulous notes on your canine companion. You continue mulling as the calming sound of the nearby aquarium trickles away. Anyways, you all see where I’m going with this. Inspiration struck and I sat and stared at the local goldfish, Carassius auratus, for an hour. 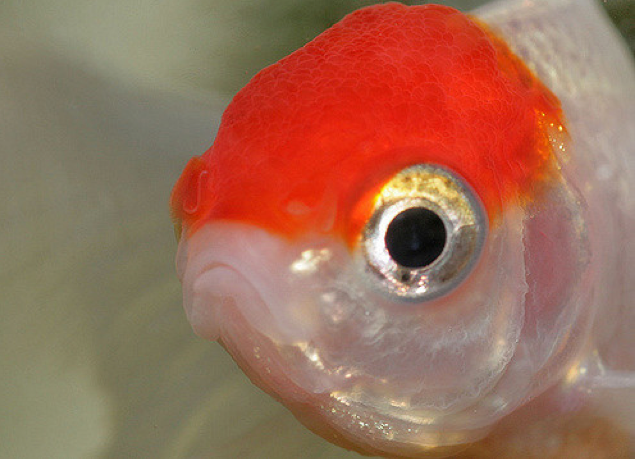 Here is a typical goldfish like the PSN fishes. This picture is infinitely better then what I managed to capture. Don’t believe me? Just wait and see….
Photo by JMLphoto used under Creative Commons Attribution-NonCommercial-NoDerivs 2.0 Generic license via Flickr

In the tank there are two able bodied fish with the largest being the fastest swimmer, a medium sized fish which hangs out with its bigger counterpart, and a third, rather sad little fellow with a slight problem. Unlike its two companions, this fish had difficulty swimming and, as far as I could surmise, had buoyancy issues. Perhaps its swim bladder is not fully functional? One proud goldfish owner even made his fish a life jacket for such situations. Don’t believe me? Check out Einstein the fish! Unfortunately, my smallest observation candidate was unable to successfully school with the other fish. It would just bump along the tank bottom or go ‘tail up’ while trying to change location or orientation in the tank. If a predator were present, pretty sure this fish would be picked off pronto.

While taking notes, the fish were fed and something neat happened. The person feeding them shook a large yellow food container in front of the tank yielding excited fish who swam back and forth quickly (less coordinated and slower for the small, faulty fish) and upon opening the tank, all the goldfish made their way to the top of the tank to gobble up the flakes.

It is possible that the goldfish have undergone classical conditioning. According to the authors of Fish Cognition and Behaviour (yes this book exists) they experience stimulus substitution (aka yellow container is followed by tank opening and ultimately food.) They also require a cognitive/awareness system. An awareness system involves active anticipation of the unconditioned stimulus which, in this case, is food. Actual scientists such as Reebs, 2000 and Brannas et al. 2005 have noted this type of associative learning in other fish species, such as Golden shiners and Arctic charr respectively. Another interesting note is that the formation of learned associations between a stimulus, such as a visual que of the container and a food reward happens more efficiently with shorter delays between the stimulus and reward which leads to my next bit on goldfish memory.

Although fish are stereotyped as having poor memories, perpetuated by Dory’s short-term memory loss in Disney’s Finding Nemo, goldfish actually have relatively good memories, in comparison to Dory anyway. For example, consider foraging and basic survival. It wouldn’t make much sense for these fish to have awful memories that left them incapable of recalling fruitful foraging locations or conditions. Moreover, learning abilities in general would be minimized, optimal foraging may not occur and survivorship may be lessened. To test goldfish memory, The Mythbusters designed their own experiment to see if the poor memory stereotype held any water. Pretty fancy for stereotypically dumb critters!

After reading break, I came back to observe the fish and, low and behold, two of them had disappeared. Turns out they hadn’t been magically abducted but had died. Not a huge revelation but still a valid one. Upon examination, the sole surviving goldfish, the largest of the prior trio, was missing patches of scales along its sides; other then the lacking scales, no changes to fish appearance or behaviour were noted. The goldfish just swam around the artificial plants and mouthed at gravel. Curious to why two fish would go belly up for no apparent reason, in conjunction to the misplaced dermal tissue, the last remaining tank mate, the catfish, Hypostomus plecostomus, was examined. This fellow is usually docile and keeps to itself with a day comprised of hiding under rocks. Come evening, it becomes a wee bit more active and ventures out to search for food along the tank bottom. During the day, the nocturnal PSN suckerfish hides under a rock and doesn’t move much. This image was captured with the extent of my photography skills.

When food deprived, say over a school break when feeding intervals become irregular, the catfish could experiment and learn that the slime coating of our favorite goldfish trio is quite tasty. Turns out that when fish are hungry, foraging learning can be enhanced as other potential pressures, such as predation, distract them less. In this case, the suckerfish’s need for food may have resulted in a disregard for its usual indifference towards its tank mates. The shy suckerfish may be a goldfish killer. Perhaps the reason why the smaller two were caught was due to their slower swimming speed, especially the smallest fish with the suspected faulty swim bladder. The largest goldfish was the fastest and may have evaded the worst of the catfish’s advances.

Overall, the world of aquarium fish is considered mundane but if you take the time to look, fish exhibit behaviors comparable to terrestrial vertebrates. They also provide the opportunity to study animal learning and cognition. It turns out that fish are not the primitive, scaly, pea-brained automatons we have chalked them up to be and they are becoming well studied in both the realms of animal behaviour and cognition.

This work by Victoria Rezendes is licensed under a Creative Commons CC-BY Attribution 4.0 International License.