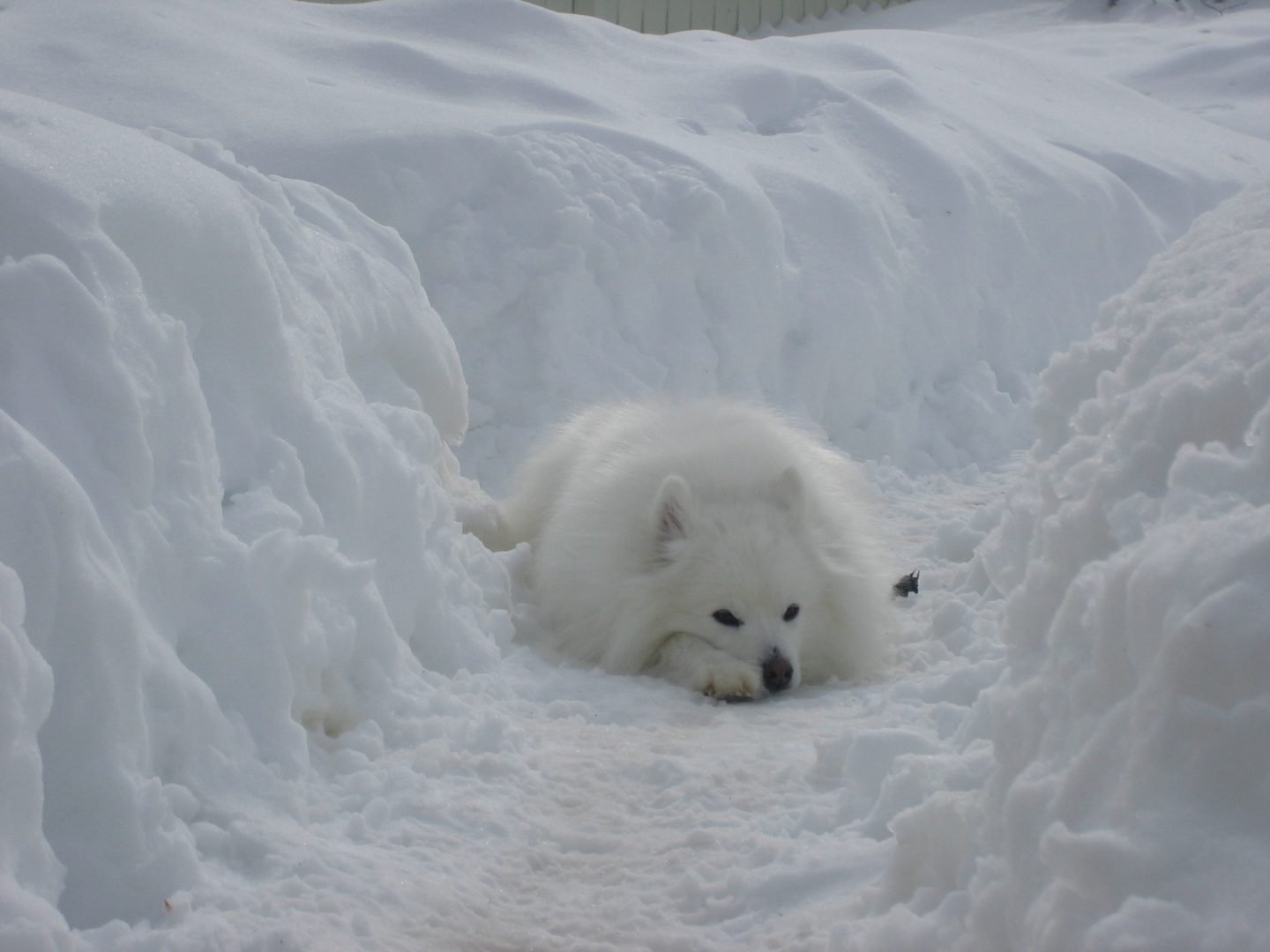 The long association between humans and domestic dogs has lead to many unique behaviours observed only within these dog breeds. Abilities such as following a finger to something pointed to, or even being able to follow the direction of a gaze is something dogs are capable of that their wild counterparts, and even monkeys and other primates are unable to accomplish. Many other behaviours are training into the dogs on an individual basis, depending on what their family expects of them. Still other actions are instinctual or depend on the personality of that animal. 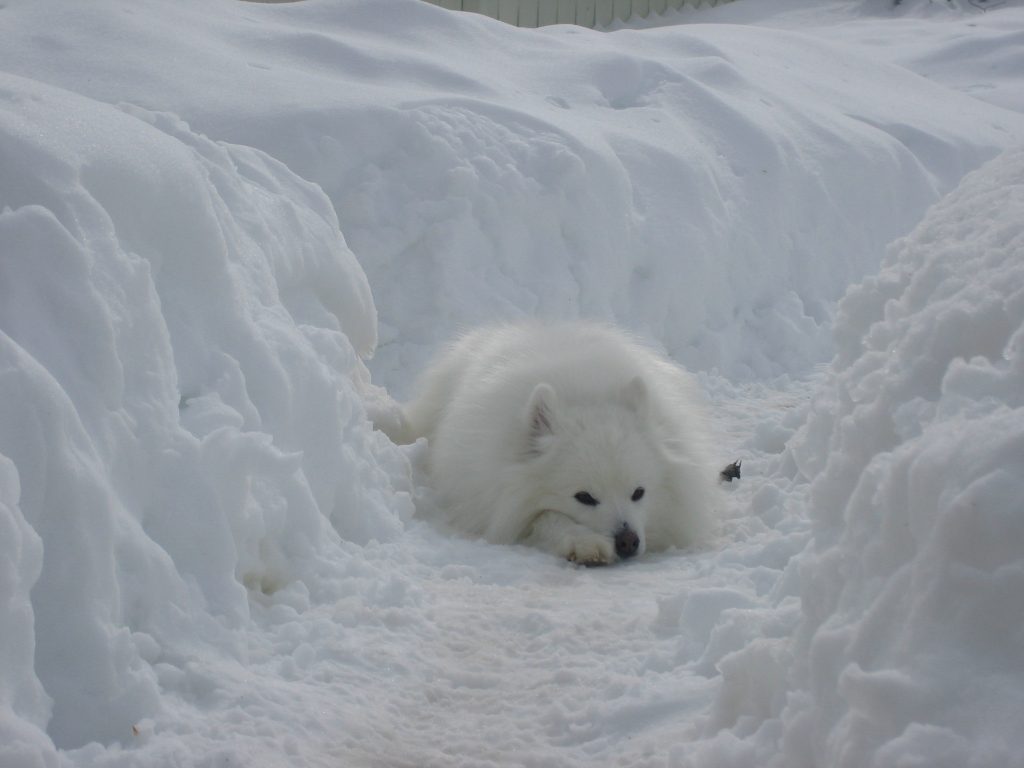 My family’s dog is a miniature American Eskimo Dog, Chinook. He was born in an end stall at a riding stable in Victoria, and we brought him home when he was only a few weeks old, and just able to leave his mother. It’s probably a good thing we don’t live in Victoria, because he loves the snow, and always seems depressed when it rains. With his thick fur coat, he handles the cold well, and manages in the summer by shedding in large tufts and finding shady spots to sprawl out on the grass of the backyard. Chinook is often excitable, doesn’t handle visitors well, can bark very loudly, and always gets insistent to be fed as soon as my mom gets home from work. His behaviour often changes in relation to ours, so when I observed him while we ate dinner and then did clean up, his activities were often correlated to what we were doing.

When we have dinner, my mother will point to his crate and tell him to “go lie down.” Often, he will listen. This particular evening, he entered the crate as usual, turned around at the back and lay down with his front paws overhanging the edge and his head up, watching us. Mom always turns around and ignores him after he listens to her, so soon he dropped his head and rested it on his paws. Apparently the lack of stimulus made him tired, because it was only a few minutes later that he got up, turned around and curled up in the back of his crate. He often groans a little when he lies down now, because he’s over 12 human years and for many of those he was on prednisone for his discoid lupus, and the drug can be hard on his joints. When he curls up in a ball at the back of his crate it generally means he’s tired and wants to be left alone to nap for a while.

We bought his crate when he was a puppy, and its slightly to small for him now, but he still loves it and sleeps in it almost every night. It’s still the place he gets stuck in when he’s been abnormally bad, even though he chewed the locks off several years ago. The locks are the only part of the crate he ever chewed. His crate also goes with him when we have to leave him at the kennel, and apparently he has been known to push his crate into a corner with the opening facing a wall and curling up in it. I think the crate makes him feel safe, and he’s not a very social dog.

A little while later, when we finished dinner mom was the first to stand up. As soon as she stood, he lifted his head and watched her for a moment, before he got up, circled around through the living room and barked at the back door to be let outside. This is another behaviour that he has learned from when he was a puppy and thought the carpet was grass so he could pee on it. Through mainly positive reinforcement, he learned that the only place he was allowed to go was outside, and then he learned to let us know when he needed to go so we could let him out. He also learned to bark at the backdoor when he just wants to go outside, because he loves being outside most of the time, snow or sun. But not rain.

Since we knew he had been out recently, no one rushed to get him, but instead started loading the dishwasher. Chinook came back up the stairs to lick the water off the dishes. I think this behaviour started around the time he started on prednisone, because it made him constantly hungry. Even when we weaned him off the prednisone, he continued to lick the water from the plates, and then from the dishwasher door before it closes. This is probably because he discovered the different tastes that he doesn’t normally get to eat. He’s not allowed to eat people food. Although my brother is bad about dropping popcorn.

While he was at the dishwasher, he would occasionally stop and have to cough. We thought at first he had kennel cough, because he hasn’t been vaccinated since he had an allergic reaction to the vaccine. However, we took him to the vet recently and learned he actually has a collapsed trachea. The treatment: prednisone. So now he’s back on prednisone, which makes him hungry all the time, and often more irritable. This all makes him sound like a really sickly dog, but he really isn’t. The coughing doesn’t seem to bother him too much, and he still seems happy most of the time, but occasionally at night he cant seem to stop coughing and then he seems a little worried about it. And I’m probably anthropomorphizing right there.

After the dishes, he barked again so we let him outside. He wandered around the patio for a moment before glancing back through the window at the kitchen to watch my brother. He likes to know what is going on and feel like he’s apart of things. When my brother and I wrestle, he always barks to come in so he can join in and play with us.

When he was outside, he wandered over and sniffed at the fence, making sure everything was alright with his territory. During the summer, he likes to sit at the top of the hill, so he can see everything that’s happening around him, and he can see down the driveway to what is happening on the street in front of our house. Another habit of his is to stick his nose between the slats of the gate, or simply watch through the gate for a little while.

After looking through the gate, he wandered through the pathways we created for him in the backyard, so he could go out in the backyard without getting stuck in the snow, because he was short legs. Again, he looked through the window to watch my brother washing the dishes, before he turned around to stand with his front paws on the ice, and his pack feet on the patio, looking out over his backyard. Chinook prefers sitting or standing on the snow and ice most of the time. In the spring, when the snow is only in small patches, he will lie or sit on those ever decreasing patches until they are gone and he has to lie in the grass. This may have to do with keeping cool, as he still has his winter coat at that point and the temperature is increasing, or it could just be a preference.

Shortly after this, someone walked down the alley next to the house. When this happens, Chinook will run back and forth along the fence barking as loud and often as he can until they have walked the whole distance and left. I don’t know if he thinks we need to know that there are people there, or he’s trying to tell them off for coming near his backyard, but everything we have tried to get him to stop hasn’t worked. We always try and bring him in when this happens, and for a while we tried a shock collar, but even the highest voltage had no impact on his behaviour besides the occasional yelp between barks. Apparently this is a reasonable common occurrence in American Eskimo Dogs, but I only remember his mother barking once.

Chinook has behavioural quirks just like any other domestic dog, and often does things that we, as humans, do not understand their purpose. Sometimes, he behaves as we have tried to train him, although he still struggles with rolling over and “dance” without the “sing”. Other times, his behaviour is confounding, but endearing, such as when he turns around three times before lying down on a chair. Still other times, he does something he knows we’ve scolded him for, but it often seems like he can’t help it. Animal behaviour is often fascinating to observe, but a struggle to understand the true motivation behind. 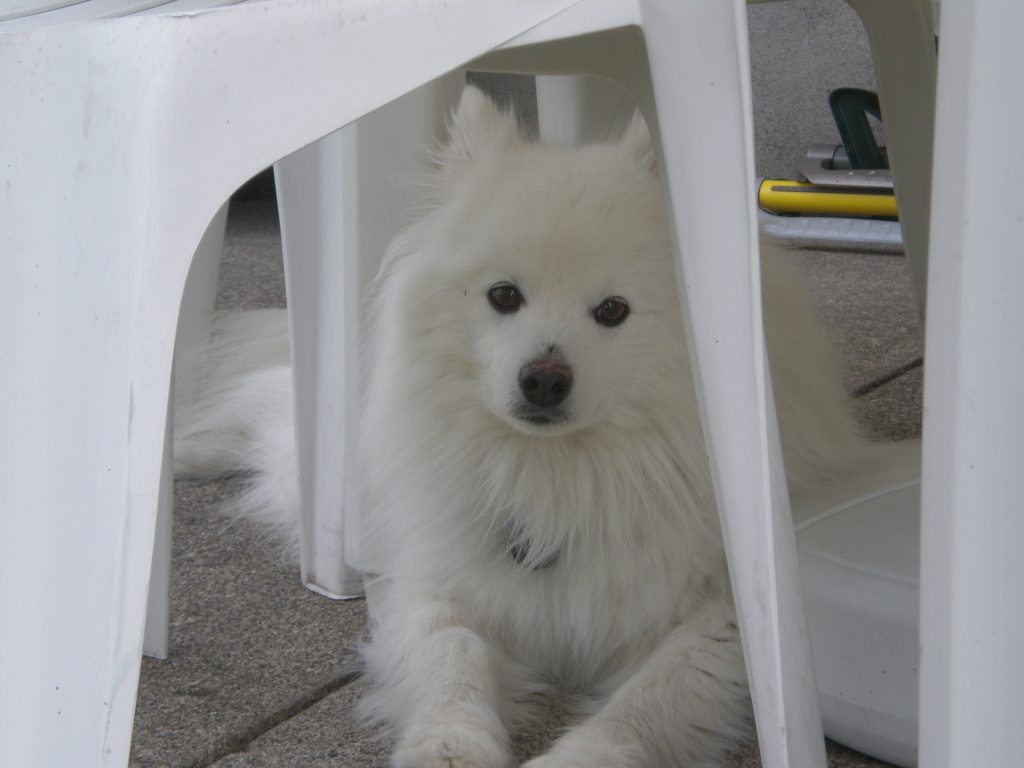 This work by Claire Shrimpton is licensed under a Creative Commons CC-BY Attribution 4.0 International License.