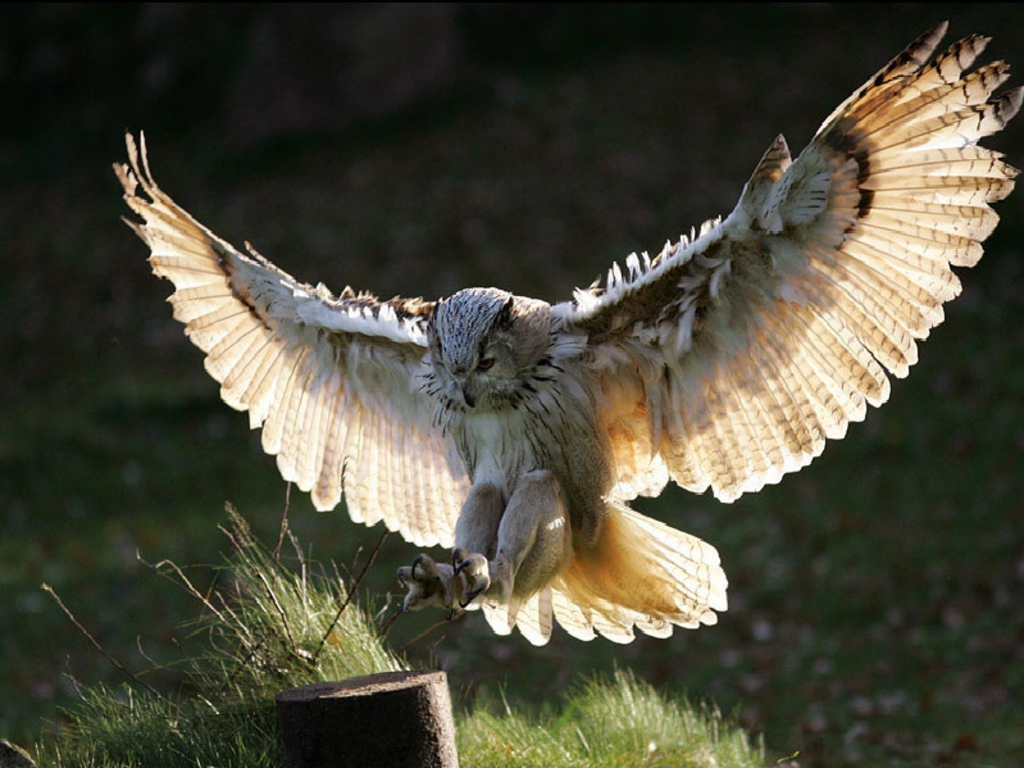 Of North American birds, the Great Horned Owl is among the earliest to reproduce. After courtship in late fall to early winter, pairs nest and eggs are laid anywhere from November to May depending on the specific location within the species range. This species exhibits monogamy, and males assist in the rearing process by providing food for their mates and young. Great Horned and other owls rarely make their own nests, generally using old nests from other raptors. This saves the birds a good amount of energy expenditure. Observation of the brooding behavior of a Great Horned Owl and her two owlets from Skidaway Island, near Savannah, Georgia was afforded by a webcam. Hatching occurred on February 25th and 28th, and at the time of observation the owlets were 3 and 6 days old, helpless and blind. This is quite early in their development which takes approximately 50 days. 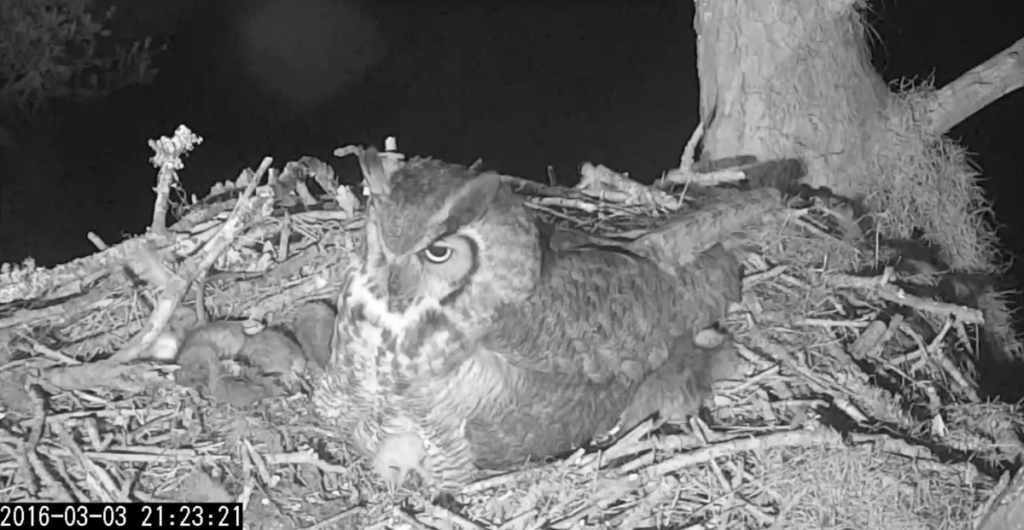 The mother Great Horned Owl sits atop its young while one protrudes. Note the stored prey next to her. Image by Kevin Huolt

Observation began at 8:27 pm local time. The mother was engaged in feeding what appeared to be the oldest owlet from a rat or similar prey item. The mother tore off strips of flesh and fed them to its young by transferring it from beak to beak. Around the perimeter of the nest, which was expropriated from a bald eagle pair, lay five other rodent carcasses. Great Horned Owls store food at their nests in this way, facilitating feeding of owlets as necessary. The mother used its talons to grip the prey while feeding its young. The mother also fed from this same rodent during the feeding process. During feeding the mother regularly observed the surrounding golf course, swiveling its head from atop its dead, 23 m tall Loblolly Pine. Great Horned Owls lack normal nocturnal predators, however the young are vulnerable if the parents are absent. Other raptors can pose a risk to adults and nests during the day, and during this period keen observation is essential in protecting territory and young. In particular, Red-tailed Hawks, and Golden and Bald Eagles are all known to prey on Great Horned Owl young, and occasionally adults. Violent interactions between these predatory birds often appears protective against nest raids by the other species.

At 8:33, feeding ceased. The mother pulled the owlets back under itself by moving forward while ruffling its feathers, and subsequently moving backwards toward the owlets. This behavior ensure the owlets are next to the mother’s skin and surrounded by feathers for warmth. This behavior resembles fixed action patterns observed in other nesting birds. The mother preened herself while sheltering the owlets from the weather (14.4 ˚C), which developed into rain as time progressed. After a few minutes (8:36) the mother repositioned herself over its young and puffed its feathers against increasing winds. The mother began to rest, closing its eyes for 15 minutes. After this it resumed its observation of the environment and occasional puffing of its feathers.

At 9:16, one of the owlets freed its head from under its mother, perhaps hungry. The mother did not feed the owlets again until 21:30. This feeding involved both owlets, and was somewhat different than the first feeding. While the mother teared strips of food from the prey and fed her young as before, she also held the rodent in her beak and seemingly allowed her owlets to attempt to tear strips of meat from the prey without her assistance. The owlets appeared to nibble at the food, but did not appear capable of feeding in this way yet. While this feeding was occurring, the mother positioned her talons so as to surround her owlets, while ensuring not to harm them. This feeding session concluded with the mother swallowing the remaining portion of the rodent. 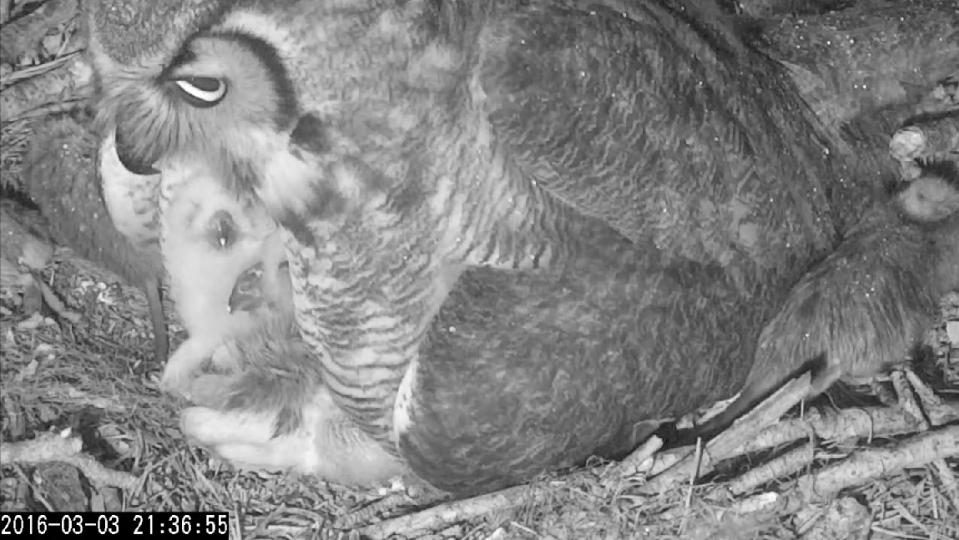 Mother owl contains her owlets between her talons during feeding. Their eyes have not yet opened. Image by Kevin Huolt

Great Horned owls, along with other owls and most raptors, do not synchronize the hatching of their eggs as do most birds. It has been speculated that this behavior reduces foraging stress on parents by staggering development. In this case the owlets age differed by three days, and a size difference was notable. Further speculation posits that this staggered hatching allows for fratricide in the event of a food shortage. If nestlings were the same age, this could not occur efficiently and all young would starve. This would reduce fitness. The evolution of asynchronous hatching in birds of prey is not surprising when considering the often cyclic population dynamics of its common prey species.

The area of this particular nest is abundant with prey, and it is likely that these two birds will both be reared to a juvenile stage successfully.

This work by Kevin Huolt is licensed under a Creative Commons CC-BY Attribution 4.0 International License.

Close Encounters of the Canine Kind