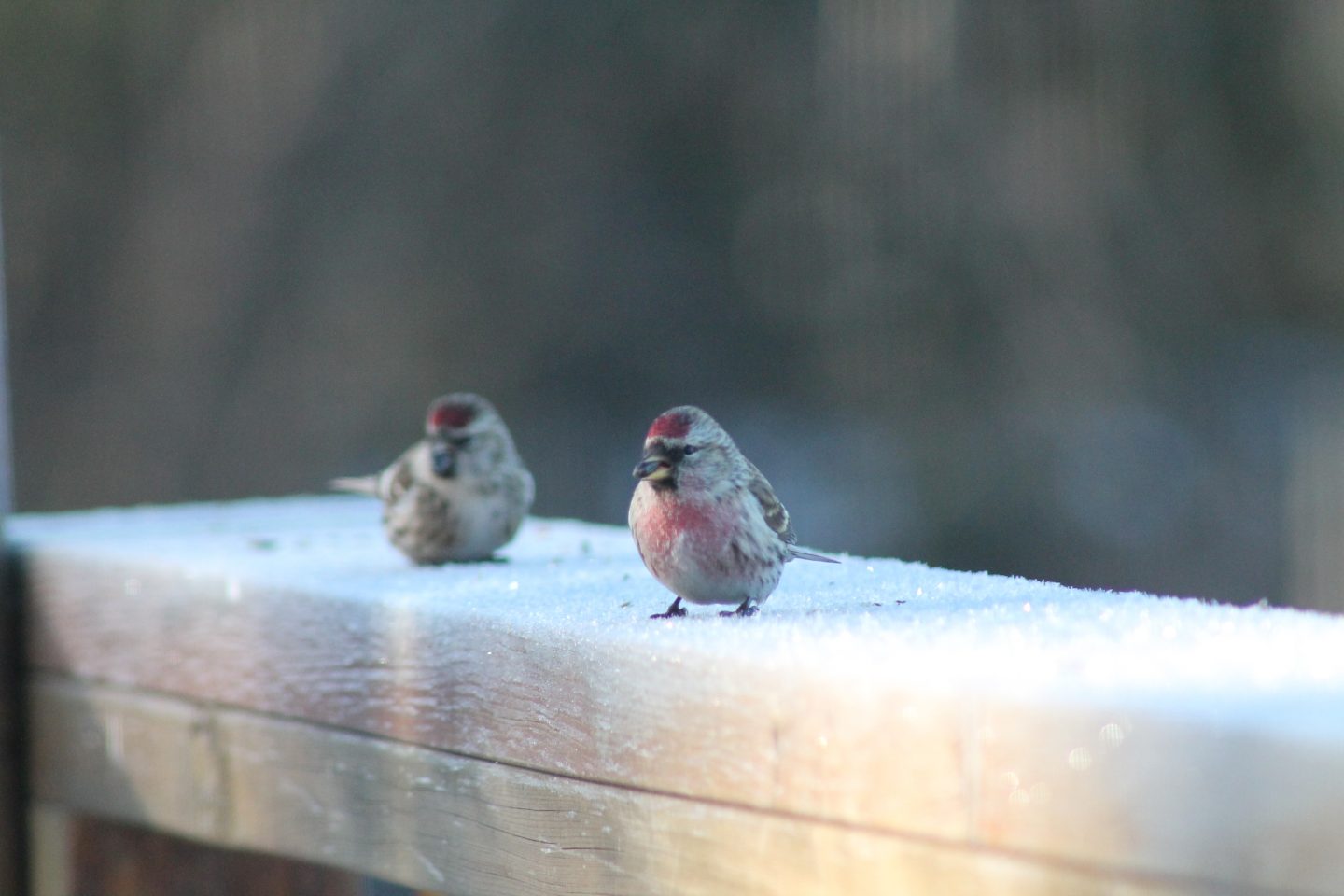 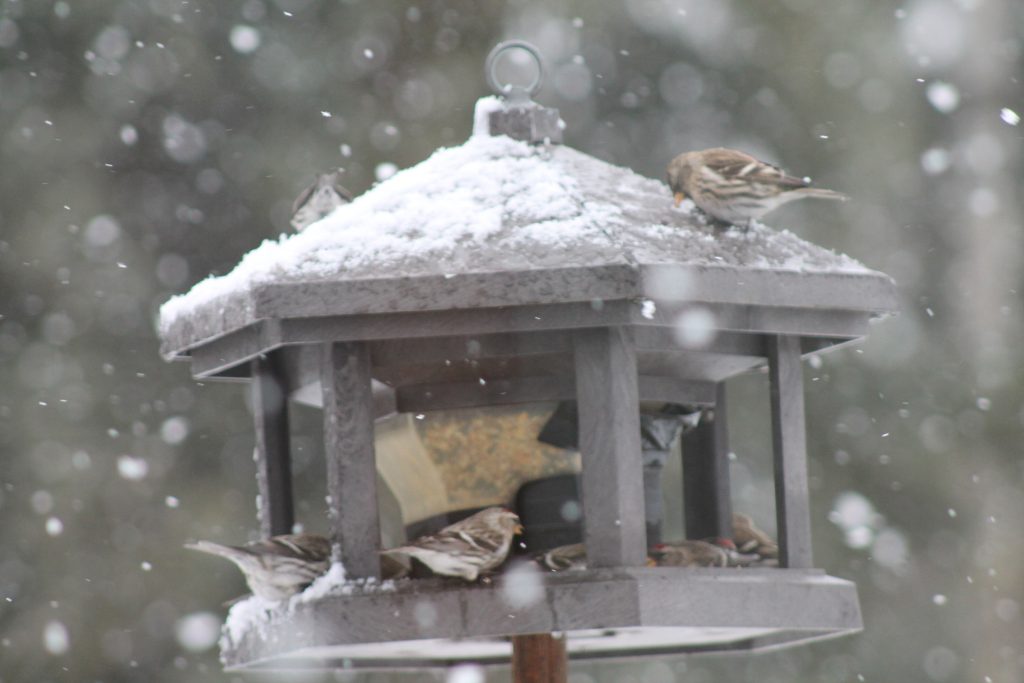 As I watched the Common Redpoll Finches I was disturbingly reminded of a past time in high school where everybody found themselves in select cliques, always forming a “pecking” order. This is not unlike the hierarchy created by birds when eating at a bird feeder. In this flock of common redpolls, there is a lot of action, with around 30 birds constantly coming and going, eating from the feeder or from the ground, and interacting with each other. With a flurry of action sometimes it is difficult to see what is going on but there are some distinct patterns the redpolls performed at every visit.

Sitting in my kitchen dining area there is a beautiful view of the birdfeeder on the deck and a small patch of trees nearby. A large group of finches had been visiting lately and I was waiting for them to come around. I had first seen 2 or 3 redpolls on the deck, looking around, seeming cautious. I believe they were scouting the area for the ferocious, fat, feline that occasionally is seen prowling and other possible predators. Within in a minute there was my estimate of around 30 birds either in the feeder, on the deck and railings, or flying between the feeder and the patch of trees nearby. At one time there is always about 5 birds in the feeder. Birds fly in from the trees into the feeder and often bump out the previous bird. It was difficult to tell which ones were consistently in the feeder but it was clear that most of them were the larger and more dominant. Often smaller birds were hopping along the ground, checking out the seeds that had been pushed out of the feeder by the busy birds above. Even more were waiting on the railing, possibly waiting for an opening within the feeder, or observing surrounds for dangers, or both!

The group only kept me company for a short twenty minutes before, in a large whoosh of feathers, they were all gone. Most of the birds flew off together in almost unison. They could have been startled and flocked as a group to the trees for safety. They returned later that day and I was able to watch another fifteen minutes of the feeder frenzy. I saw mostly the same behaviors repeated but it had begun to snow. The birds still kept themselves busy in the white fluff, and didn’t seem deterred in the slightest.

Many questions came to mind while observing these birds. I wish I could have tagged individuals to see which ones were most often in the feeder, are the larger birds always the ones returning, or have dominance over the feeder? Are they male or female, juvenile or adult? From my short observation, the larger, more distinguished birds were often in the feeder while the smaller less colourful birds hopped along the bottom, picking up what falls to the deck. This position may be more vulnerable as it is more open to predators. 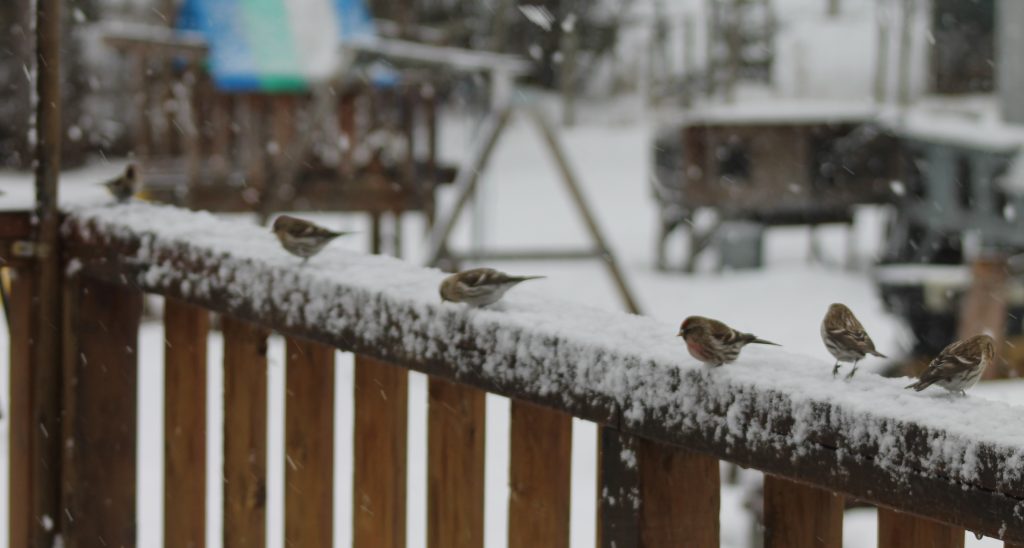 Redpolls in a row.

As the birds flew off I wondered why the flock would move on while the feeder was still relatively full. Could it be they require other types of food that the feeder is not providing, causing them to forage in the forest where they would assumingly have a more difficult time finding food. It would be interesting to study the interactions between the birds that do not forage using feeders compared to those that do. Does the feeder create more aggressive or dominant behavior as birds are competing over the small feeder space? It is incredible that by watching a few birds for a small period of time that so many questions can arise. Too bad I’m the grunt worker still. 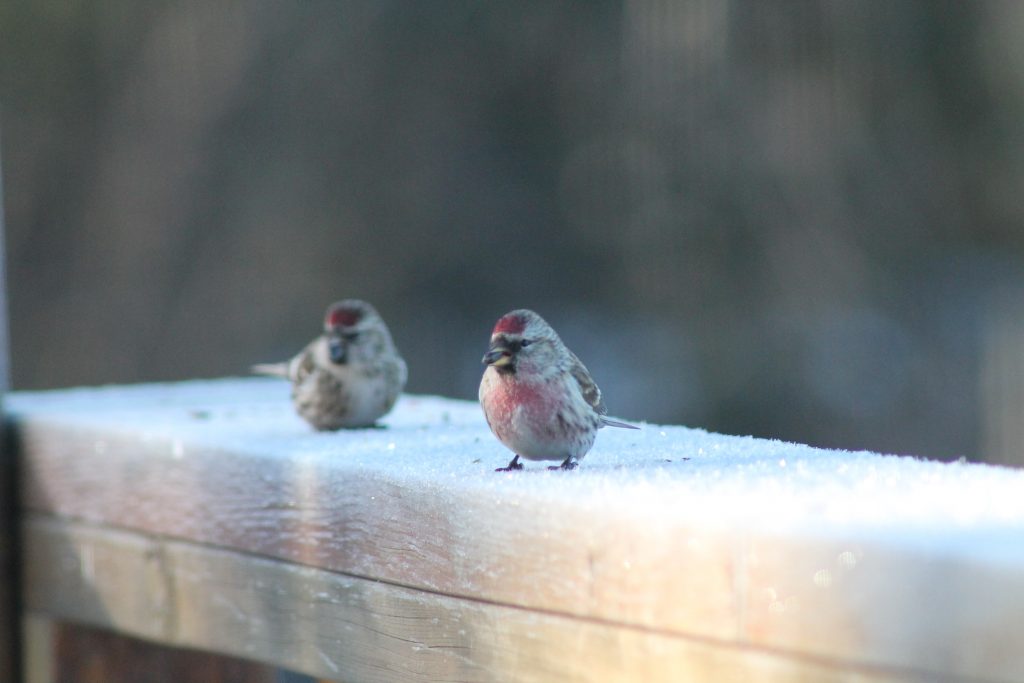 Eating a seed and watching over the others.

It would take ages to study all of these questions, but I do know the group dynamic is complex and fascinating. I never saw a squabble between the redpolls. There was always one bird willing to back down to allow a new one in, or they knew when to wait for the dominant bird to finish finding food. An internal hierarchy of the group must be present for this relationship to work so smoothly. This observation only involved the intraspecific interactions of this common redpoll flock (aside from the one chickadee that always was trying to check everything out). Competition between other species of bird that might be interested in the feeder are important to bird behavior as well. Although they would get by without the efforts of a wildlife enthusiast like myself, I like to believe they like my feeder the best.

All photos were taken by Michelle Miller

This work by Michelle Miller is licensed under a Creative Commons CC-BY Attribution 4.0 International License.