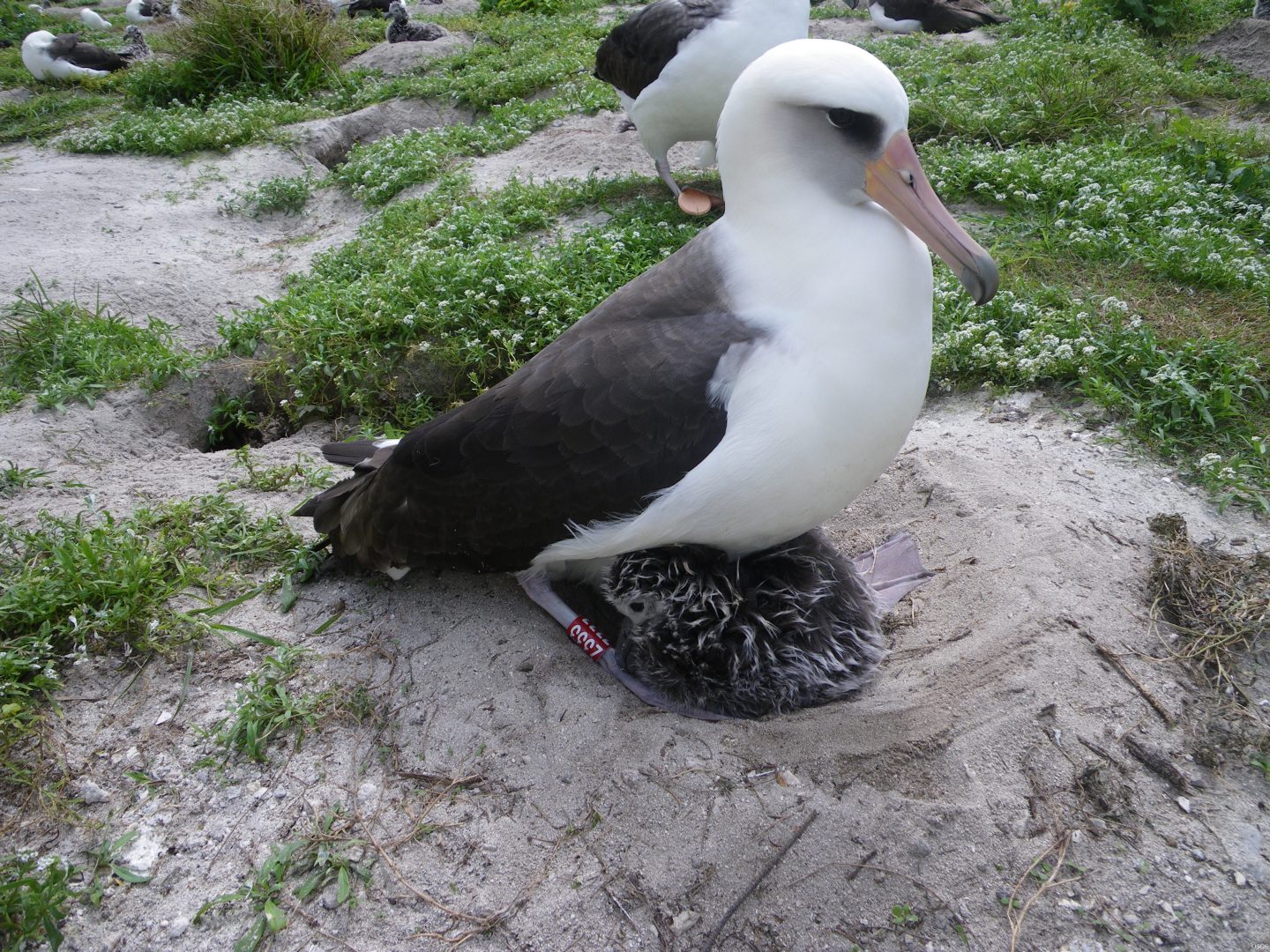 “At length did cross an Albatross,

Thorough the fog it came…

It ate the food it ne’er had eat

And round and round it flew…

The helmsman steered us through…

And a good south wind sprung up behind;

And everyday, for food or play,

Came to the mariners hollo…

I shot the Albatross…

And I had done a hellish thing.”

In the poem, “The Rime of the Ancient Mariner”, by Samuel Taylor Coleridge, the author described the soaring oceanic bird, the albatross, as a symbol of protection and communication to a crew of wayfaring sailors that were lost at sea. The albatross was able to lead the crew out of the harsh fog that engulfed their ship and protected the crew from their watery demise. It circled high above to communicate to the crew where the winds were, and was given food as payment for its services – like they were a colony working together. Though the above example given was fictitious, when observing the behavior of a Laysan albatross, it is clear that it displays both communicative and protective behaviors in the wild. The shooting of the albatross by the Ancient Mariner in the poem can be seen as a fictional parallelism to the detrimental effects humanity has caused on the feeding behaviors of the Laysan albatross. By polluting the oceans with recyclable plastics it has an increased chance of death. Here I attempt to explain the protective and communicative behaviors of the Laysan albatross that I observed, and additionally, the possible detrimental change on behavior that human generated pollution may be causing these seafaring birds. 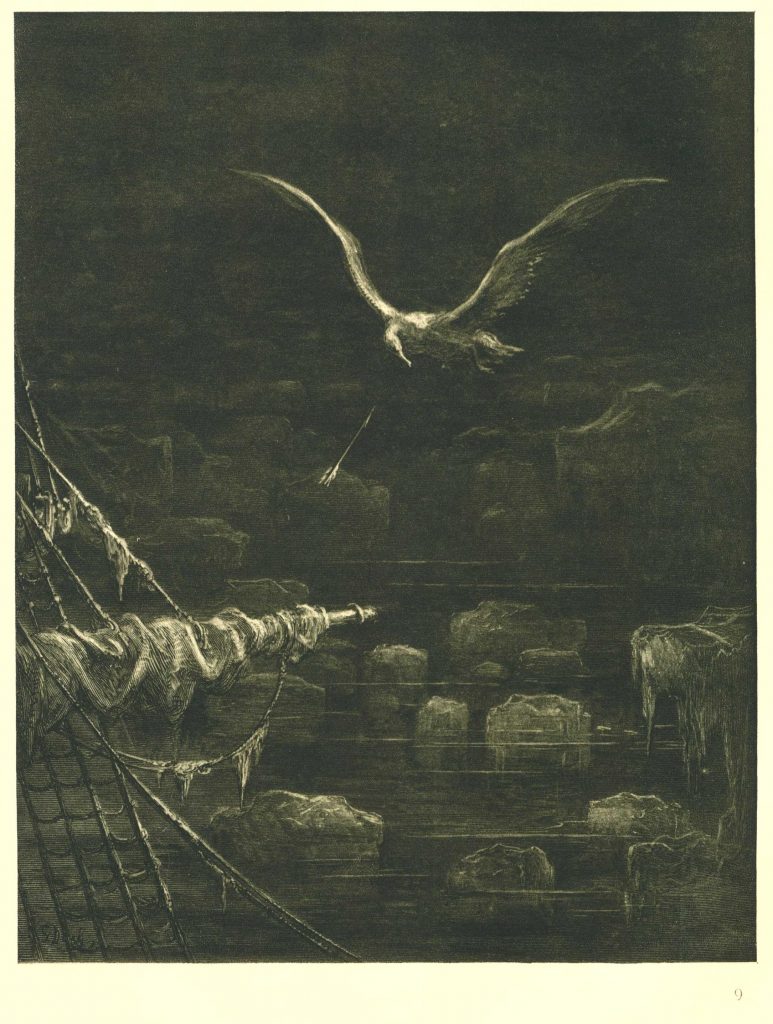 Communication and protection from threat are important in all animal societies for the transfer of information and the establishment of self in the social hierarchy, respectively. The Laysan albatross produce ground-based nests that are at high elevations to avoid the effects of rising tides and are a seafaring, soaring bird that live within small, social colonies located in the tropical islands of the Pacific Ocean, California, the Aleutian Islands, and Japan . Because of their colony-based lifestyle, it is likely that Laysan albatrosses that I observed performed a variety of communicative and protective behaviors in response to others in the colony, which likely increased their own fitness and survivability. A purely social, communicative behavior of a Laysan albatross that I observed occurred between a nestling and its own parent. Additionally, a communicative behavior between a nestling and a nonparent, followed by a conjunctively protective and communicative behavior of a parent to a nonparent albatross was observed. Examples of these styles of observed social interactions are outlined below.

Parent to nestling communication appeared to be of great importance in the colony, based on the observed urgency of interactions that occurred between the nestling and its parent Laysan albatross. When the nestling produced a communicative vocalization, the parent returned moments later to check on the nestling. Upon arriving, the nestling made more calls, and the parent returned a similar call. This behavior could be hypothesized to be the practicing of a new call for the Laysan albatross hatchling, or simply the calling of the parent to check up on the hatchling. The former hypothesis could be true, as it has been previously observed that long-living birds, such as albatrosses, require an extended learning period, so the nestling may have required further practice performing its call.  In either case, however, each behavior would lend itself to the successful ability of the hatchling to communicate effectively with another member of its species, thereby enhancing fitness and survivability in the colony. While it was observed that intrafamily communicative interactions occurred between the albatrosses, it was noted that interfamily communications occurred as well. 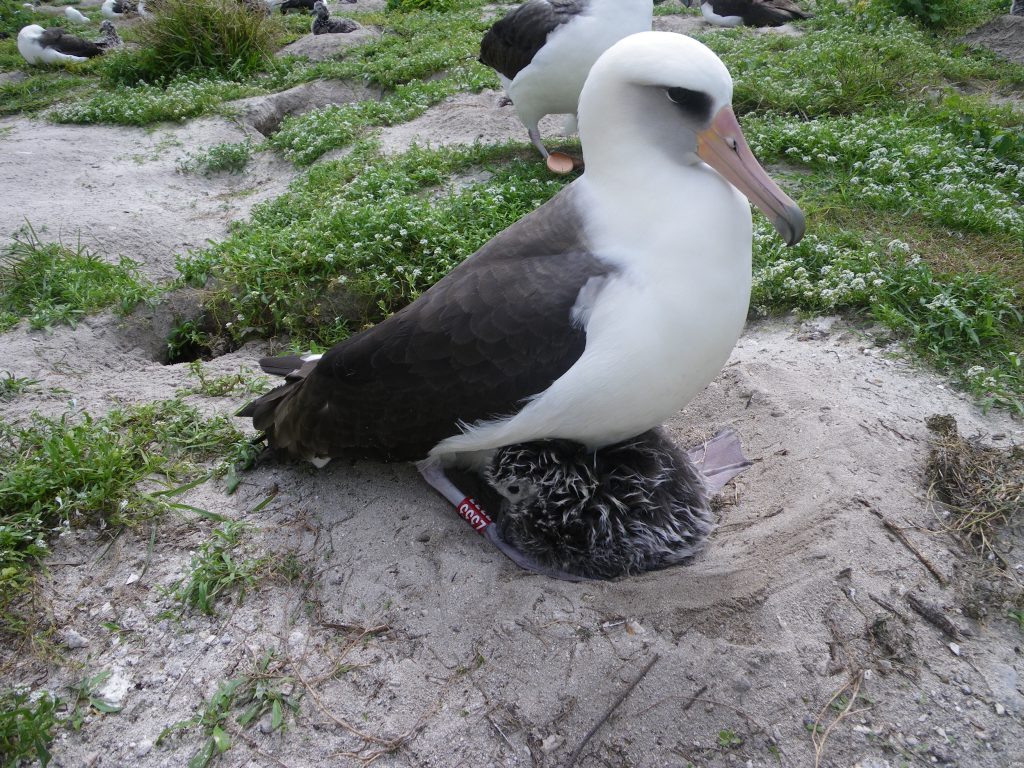 Communication between a nestling and a nonparent, and the subsequent interaction between the nonparent and the nestling’s parent were observed in the interfamily behavior of two families of Laysan albatross; both of which likely lead to an effect on survivability and fitness. First, the nonparent aggressively pecked at the unattended interfamily hatchling in its vicinity. This aggressive display was theorized and was previously described by Rice and Kenyon (1962) to be used as a way to teach submissiveness to interfamily young in the albatross colony. By instilling such interfamily submissiveness, it could be hypothesized that the establishment of a social hierarchy could be achieved in which the submissive hatchling is lower than the aggressive nonparent. Therefore, the behavior of interfamily aggression also is likely to lead the fitness and survival of the aggressive nonparent.   During this aggressive display, the hatchling let out a cry. Its parent appeared in a flash, stepping between its young and it was able to end the altercation by staring down the nonparent albatross. In doing so, it could be hypothesized that the parent is communicating to the nonparent that it is not to be trifled with; therefore, the parent is as high if not higher in the social hierarchy than the perpetrating nonparent. By successfully communicating in this way, conspecific protection may be established, but how are the Laysan albatross able to cope with the devastating pollution humans have on them?

Simply put, the Laysan albatross have been unable to cope with the massive impact that the humans have intentionally had on both their feeding and their localization behavior. Because Laysan albatross had rarely been in the presence of mammalian predators, historically, they have been few anti-predatory mechanisms of avoidance to dealing with the presence of humans. And thus, readily habituate to geographic areas that humans inhabit. It can be hypothesized then that this overall change of behavior likely lead to the behavior of ingesting plastics that were in the vicinity of their habitats. Furthermore, it has been seen that the introduction of human disturbance to these colonial birds, their physiology, reproductive behavior, and reproductive success have declined. By affecting their feeding, physiology, reproductive behavior, and reproductive success, how sure can we be that we haven’t affected behaviors, such as the protective and communicative behaviors mentioned above? 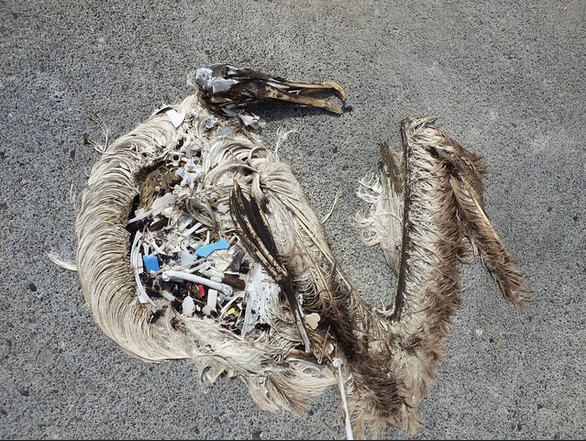 The Laysan albatross acts as a symbol of communication and protection. Albatrosses display behaviors in this way not just to fictitious sailors lost at sea, but also within the intricate colonies that they inhabit. This can be demonstrated by the communicative and protective behaviors that they display when interacting with others in the colony. The communication seen between a calling nestling and its parent, the communication of aggression by nonparents to nestlings, and the protection of parents from aggressor nonparents, each stand as a viable representation of these traits. However, by introducing the Laysan albatross to the presence of humans, detrimental effects have been observed in the behavior of the seafaring bird; it seems that we have metaphorically “shot the Albatross.” I hope that you have enjoyed this brief walkthrough of the communicative and protective behaviors that I have observed, but also that you are now aware of the detrimental effects that we, as humans, may have had on the Laysan albatross’ behavior.

This work by Tyler Basran is licensed under a Creative Commons CC-BY Attribution 4.0 International License.

Communication, Laysan Albatross, Protection, The Rime of the Ancient Mariner