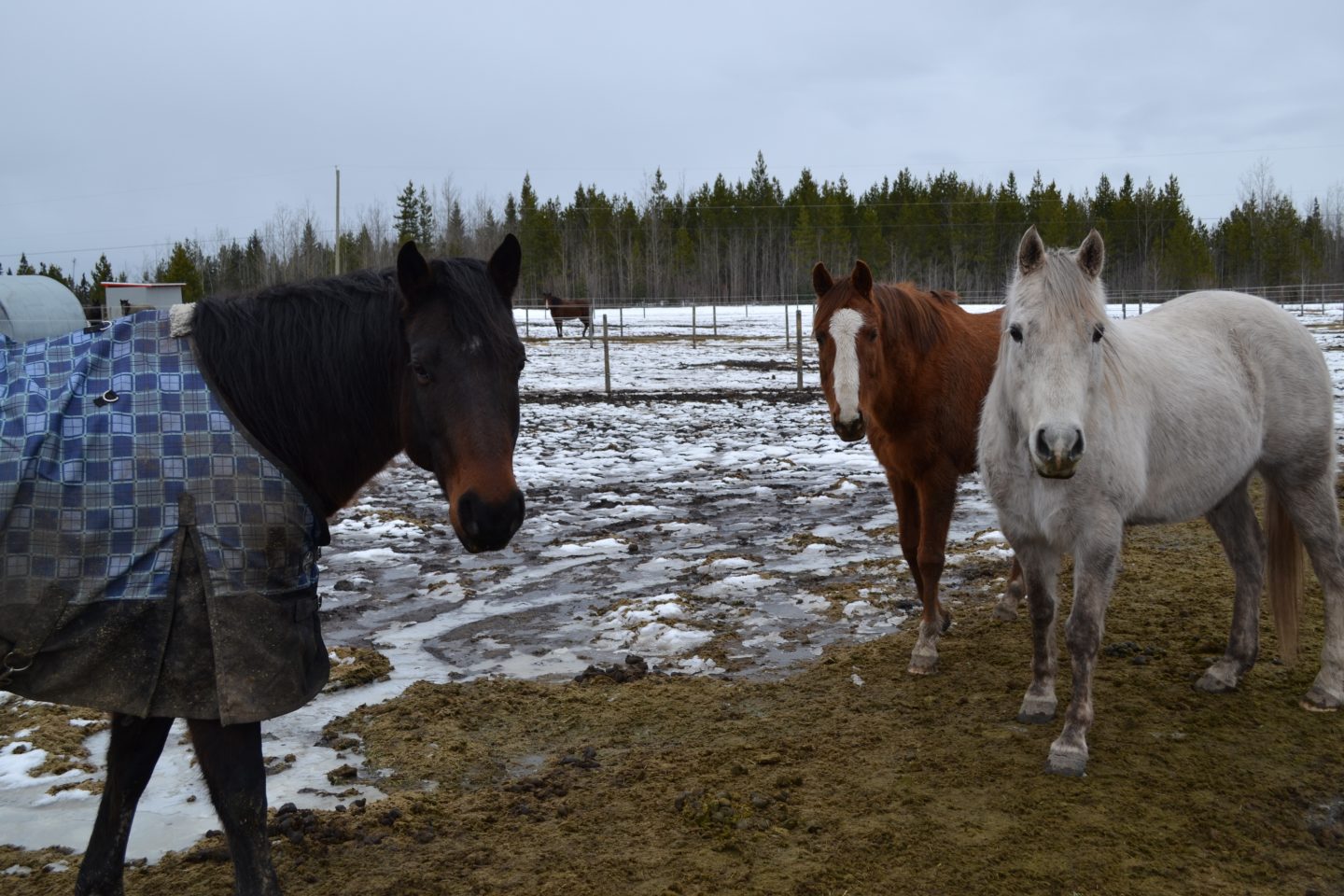 The horses above may seem like an entirely innocent herd of geldings, but don’t be fooled. In their midst is a horse hiding a very addicting and compulsive vice. While this vice may not send this horse spiralling into debt and despair, vices in animals can be serious and can possibly indicate a larger problem.

Ethologically speaking, abnormal behaviours can affect the quality of life for some animals, and can be harmful to the animal and the animals surrounding it. Cooper and Mason (1998) describe an abnormal behaviour as being an indicator of poor welfare, a means of adapting to a captive environment, potentially harmful, having little impact on the performer’s quality of life. If an environment is inadequate the animal may become frustrated or anxious, which manifests as an abnormal behaviour. Some general behaviours across species are weaving, pacing, lashing out, etc. Abnormal behaviours are quite controversial in that wild animals typically have unlimited space to roam, and constant activities that require their attention. In captivity, the roaming space and amount of activity is reduced to almost nothing, leaving the animal forced to find ways to occupy their time. Thus, an abnormal behaviour can be seen in society as an indicator of mistreatment, but may not always be since horses can be genetically predisposed to vices.

In horses, vices (behavioural abnormalities) can manifest as weaving, box-walking, wind-sucking, cribbing, or wood-chewing, among others. I spent 30 minutes observing a small herd of horses living in a large pen who were fed hay twice a day. Since horses are naturally herd animals and spend their entire day grazing, this environment is adequate in some ways, but lacking in others. This environment differs from a free-living environment in the sense that roaming space is greatly reduced and feed is not constantly available, but it is similar in the sense that horses live in groups with enough space to play. During my observation, one horse performed an abnormal behaviour called cribbing (see video below) for about 50% of the time he was observed. He was unable to approach the gate area where the posts were without stopping to crib. Once he started cribbing, he continued for several minutes until something else caught his attention or one of the other horses shoed him away. This horse spend the rest of his time either foraging for leftover hay on the ground, or standing with the other horses. Any time his attention was brought towards the gate (ie. when I approached, or vehicles drove by), he approached it and began cribbing again.

This is a video of the horse cribbing. Note how he grabs the post with his teeth, pulls back his entire body, and flexes his neck muscles. You can see exactly how much force is generated by looking at the muscles in his lower neck. If you listen carefully, you can hear the characteristic ‘grunting’ noise he makes. Also, note the wear on the post. This shows that this behaviour has been going on for a long time with great frequency. 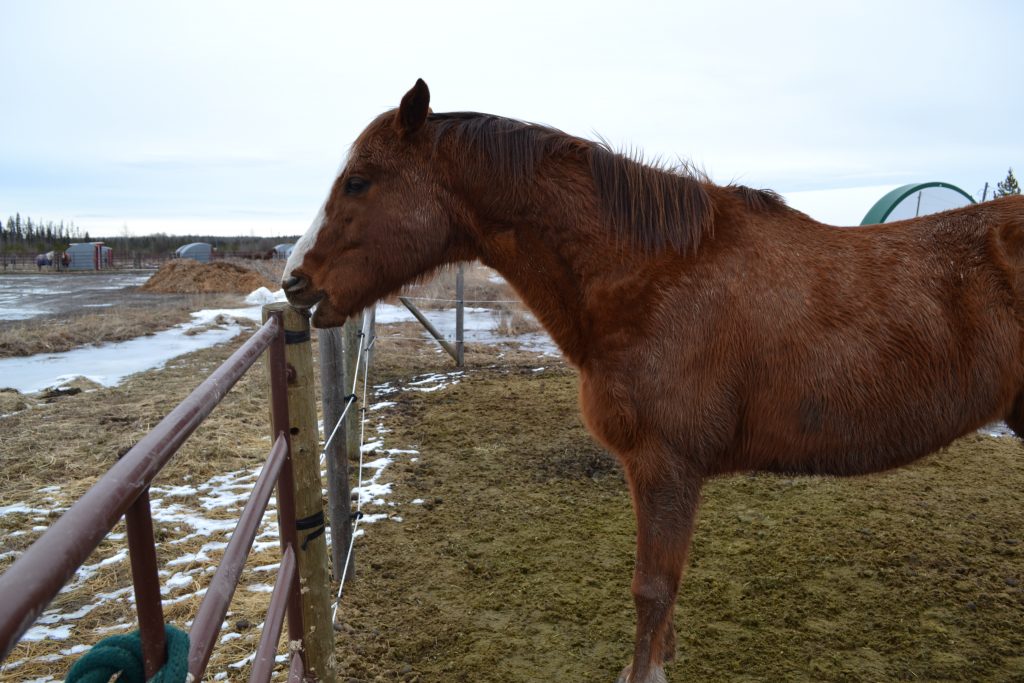 Photo by Caitlyn Gallinger
In this image of the horse mid-crib, you can see the curved line of the muscle in his neck, as well as the bracing with his body.

This represents a compulsive cribbing behaviour, where the horse spends a significant amount of his day doing it. Cribbing is when a horse grasps a fixed horizontal object (usually wood) with their front incisors, pulls back and ‘swallows’ air. This is usually accompanied by a grunting noise. This behaviour is linked with tooth wear, colic and a decrease in body weight, and is though to mirror OCD in humans. There is controversy whether or not this behaviour is viewed as a harmful ‘bad’ habit since this behaviour generally has mild impacts on the health and performance of the horse. I hypothesize that this behaviour is an addictive behaviour that presents some sort of reward to the animal. I noticed that after each crib, the horse licked and chewed. Licking and chewing, in my experience occurs after a horse achieves release from some sort of tension or pressure, but I have also seen horses lick and chew after a chiropractic session, indicating that it might be a response to relief of pain or a good feeling. With this hypothesis, the behaviour would not have much evolutionary benefit to the species, so I don’t think it is an adaptive behaviour. To highlight the controversial nature of this behaviour, however, some circles consider cribbing as a positive behaviour that relieves gastric stress. In this case, the behaviour could be an adaptive behaviour that developed when horses were introduced to domestic diets. The evidence for this is weak, but the cause and effect relationship for this behaviour is difficult to ascertain for any hypothesis. 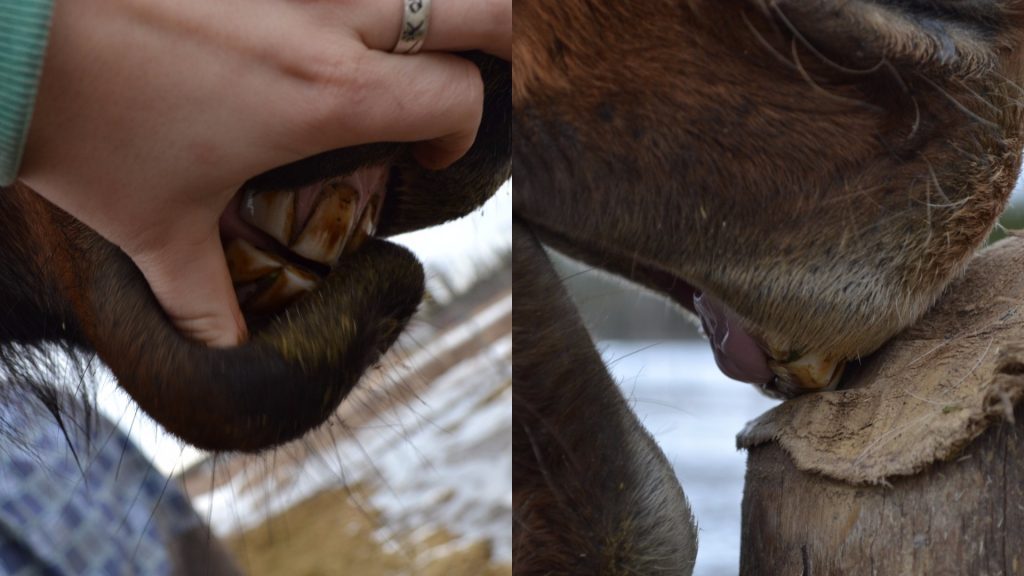 Photos by Caitlyn Gallinger
The teeth of a horse who does not crib vs. the horse who cribs. Note the rounded edges and the wear on the teeth of the cribbing horse. You can see that they are worn down so that you can see the gum behind.

A study by Luescher et al. (1998) found that cribbing behaviours increased with the age of the horse, and that geldings and stallions were more likely to crib. This was thought to be due to different handling between sexes, and by more exposure to stressful environments. In addition, Houpt (2012), found that horses who cribbed worked equally as hard for a cribbing opportunity as for an opportunity to eat sweetened grain, giving the appearance that cribbing was as necessary to the horse as eating was. Why might a horse have this level of motivation for cribbing? There is some evidence of a genetic factor in the tendency to crib, and weak evidence that it can be a learned behavior from other horses who crib. A study by Rendon et al. (2001) found that cribbing causes excess in the dopaminergic activity in the brain. The cribbing causes a release of dopamine by endorphins, creating a reward mechanism for the horse. In the same study, it was demonstrated that NMDA receptor antagonists reduce this behaviour, reinforcing the role of dopamine in this behaviour.

This horse demonstrates a classic case of cribbing in a horse. It is important to note that horses who have grown up in a pasture may respond to more confining living situation much more differently than horses who have grown up living in stalls might. Equally important, it should be noted that there is no way of telling if this horse developed this behaviour while living in this environment, or had lived in a previously more restricting environment in which it developed. Even more, there is no way of knowing if this horse was genetically predisposed to cribbing or if he learned it. Thus, it is difficult to ascertain whether the relationship is correlation or causation.

Learning of the neurochemical association with cribbing helps us understand why it is so difficult to prevent. There are many tools used to prevent cribbing, from a collar that prevents the required flexion of the neck muscles to shock collars that prevent distension of the windpipe. The efficacy and ethicality of these methods, however, are widely debated and controversial. Some lifestyle changes that might have a positive effect are increased exercise, increased pasture time and more frequent feedings. More research is required to find out the underlying cause of cribbing, and whether or not it has significant health detriments to the horses.

This work by Caitlyn Gallinger is licensed under a Creative Commons CC-BY Attribution 4.0 International License.