Oh Canada, the true north strong and free that is known for its scenery, poutine, and Mr. Bullwinkle himself, the majestic moose. Spanning across the northern hemisphere, moose, Alces alces, is the largest of the deer family, with adults weighing over 300kg and reaching 6ft in height at the shoulder. Living in a varied habitat, they can browse on young shoots of deciduous trees such as trembling aspen and striped maple during warmer months of the year. Having long legs and a nose that can be closed while underwater, moose are also capable of acquiring and consuming aquatic plants such as pondweed and lilies. Come winter their diet is composed primarily of twigs and other lower nutrient foods. Being such large and adapted critters, it is hard to believe that their populations are diminishing but, unfortunately, this is the case. Humans have contributed to a variety of challenges faced by moose such as altering their movements and foraging behaviors with highways and through climate change by increasing heat stress and parasite loads. 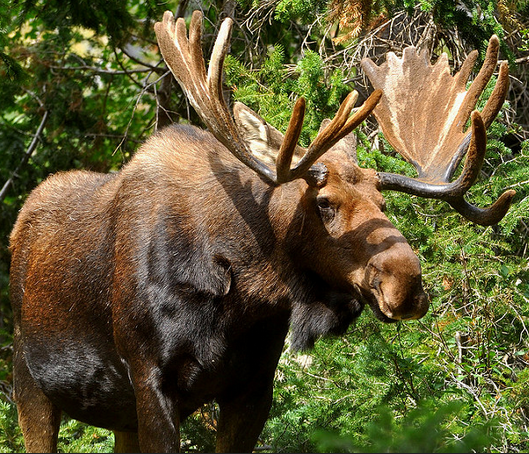 Although not an endangered species, moose populations are decreasing and highways are a contributing factor to moose mortality. Roads tend to follow the natural contours of the land and often cut through or are parallel with habitats and corridors preferred by ungulates such as moose. Obstacles for moose to navigate, roads increase habitat segmentation and can decrease a moose’s ability to freely travel between patches thereby limiting the availability to new foraging areas and potential mates. To compound the matter, moose can travel along roads at their own peril. Linked to fresh plant growth and late senescing foraging attempts, increases in road use by moose are noted in both spring and autumn due to nutritional needs of the animals after surviving winter and in preparation for it respectively.

Another impact of roads on moose populations is consistent bush-cutting to prevent plant overgrowth and forest succession. Performed to additionally increase motorist safety by improving the line of sight down a road, when cutting is performed in the year can put both motorists and moose at greater risk of potentially deadly collisions. Plants cut midsummer yield fresh growth that is highly nutritious and therefore attractive to foraging moose. Inadvertently, a tasty salad bowl for moose has been created while trying to enhance motorist safety. Consider that moose are also active at night and have dark fur, which makes them difficult to see, and it is hardly surprising that negative impacts to moose foraging along roadsides occur. Lastly, moose can be attracted to potentially dangerous roads due to the presence of salt, which is limited in their herbivorous diet.

With the climate warming and habitats subsequently changing, moose are in for an uphill battle for survival. Being well adapted for cold temperatures, moose are heat intolerant. When temperatures rise, respiration increases and so too do thermoregulation costs. As a result, moose may suffer from decreased food intake and lose weight thereby making them more susceptible to both predators and disease; a heat stressed animal’s fitness may decrease as, if an animal is less physically fit, it may produce fewer and lower quality offspring. Moreover, a warming climate puts southern populations at increased heat stress risk and, with time, they may disappear from their current, most southerly ranges. Moose ranges may be gradually pushed northwards.

To further complicate matters, a warmer climate means increased parasitic loads. Susceptible to a variety of pests, such as liver flukes and meningeal parasites infected moose suffer from decreased health and death. Associated with substantial moose deaths across North America, the tiny winter tick, Dermacentor albipictus, can infest and suck its host’s blood to the point moose anemia and death! Historically, colder winter temperatures and heavier snowfall decreased the number of ticks that could find a host or successfully overwinter. Moose also scratch their coats off due to tick irritation and become white ‘ghost moose’ which are prone to hypothermia. This is a huge concern for the maintenance of moose populations and the British Columbian government is currently asking the public to report ghost moose with a current survey. 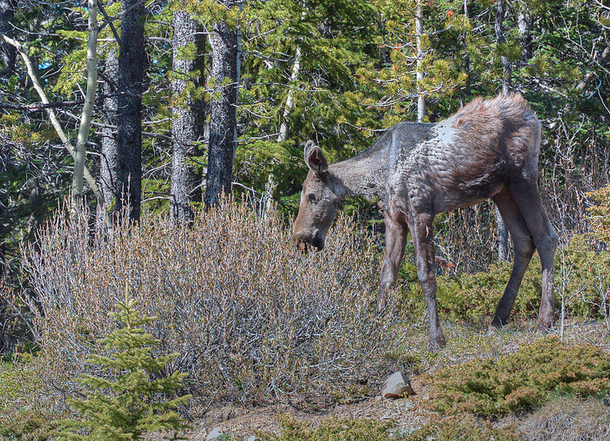 This ghost moose has scratched off some of its coat due to a tick infestation.
Photo by LoveSomeBunny used under Creative Commons Attribution-NonCommercial-NoDerivs 2.0 Generic license via Flickr

Overall, humans are causing moose a fair amount of grief be it through habitat segmentation, vehicular collisions, and the impacts of heat stress and altered parasite loads through climate change. This said, it is not too late to make informed decisions regarding highway vegetation cutting and lowering greenhouse gas emissions. After all, it wouldn’t really be Canada, let alone North America without the iconic moose. 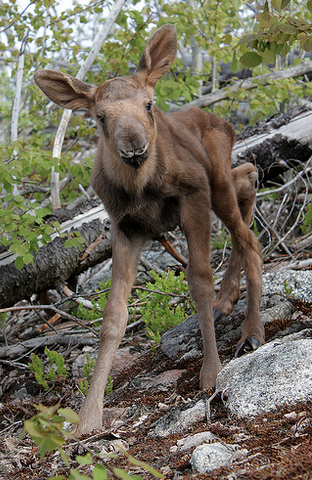 To end on a happy note, here is an absolutely adorable calf!
Photo by Ingeborg van Leeuwen used under Creative Commons Attribution-NonCommercial-NoDerivs 2.0 Generic license via Flickr

This work by Victoria Rezendes is licensed under a Creative Commons CC-BY Attribution 4.0 International License.

How did the Chicken cross the Road? Wildlife Overpasses and impacts on movement