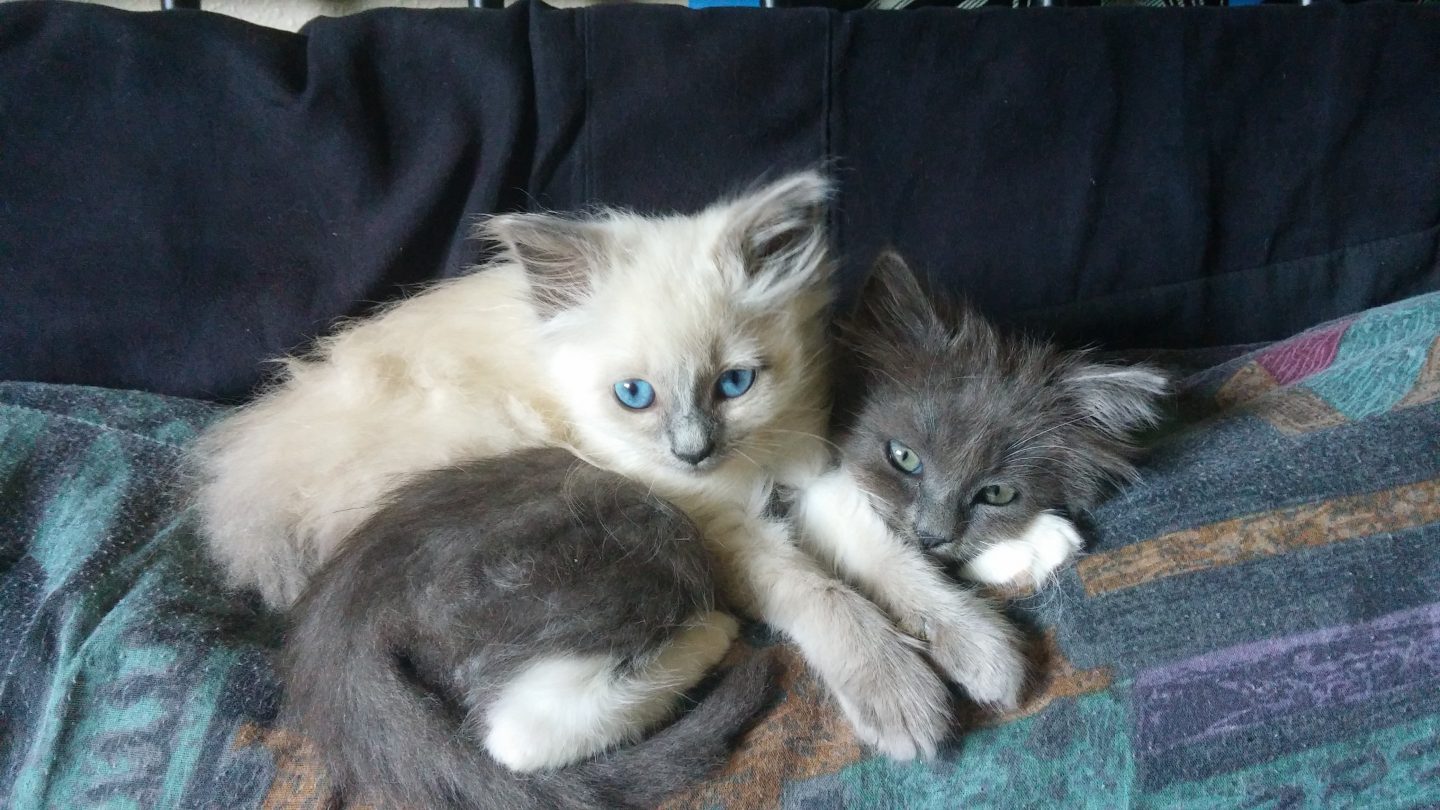 The common house cat (Felis catus) has been a faithful, though sometimes unenthusiastic, companion for thousands of years. The earliest evidence of cat domestication can be traced back to around 7,500 BC where, on the island of Cyprus, a cat was found ceremoniously buried alongside its likely owner. These early Neolithic people living around the fertile crescent were developing a new form of lifestyle. As the practice of agriculture started to spread, more permanent settlements could be established. With this new form of lifestyle came some new problems. The storage of grain and accumulation of waste attracted rodents into their settlements. Wild cats (Felis silvestris) were wide spread in the region at the time. They took advantage of the abundant resources found in human settlements and adopted the sedentary lifestyle alongside them. Evidence suggests that those early Neolithic peoples had very little to do with the domestication of cats. It is considered to be a natural evolution that early felines initiated themselves. In contrast with dogs, which have been selectively bread for useful traits such as their ability to learn and friendliness for thousands of years, cats have only recently been selectively bread. The creation of fancy breeds through artificial selection of physical characteristics began as recently as the 19th century. The lack of selection for any particular physical or behavioral characteristic along with interbreeding with wild species has kept Felis catus from becoming completely devoted to their owners in the same way that dogs are. This new understanding of the domestication of cats can help to explain some of the quirky behaviors house cats display. 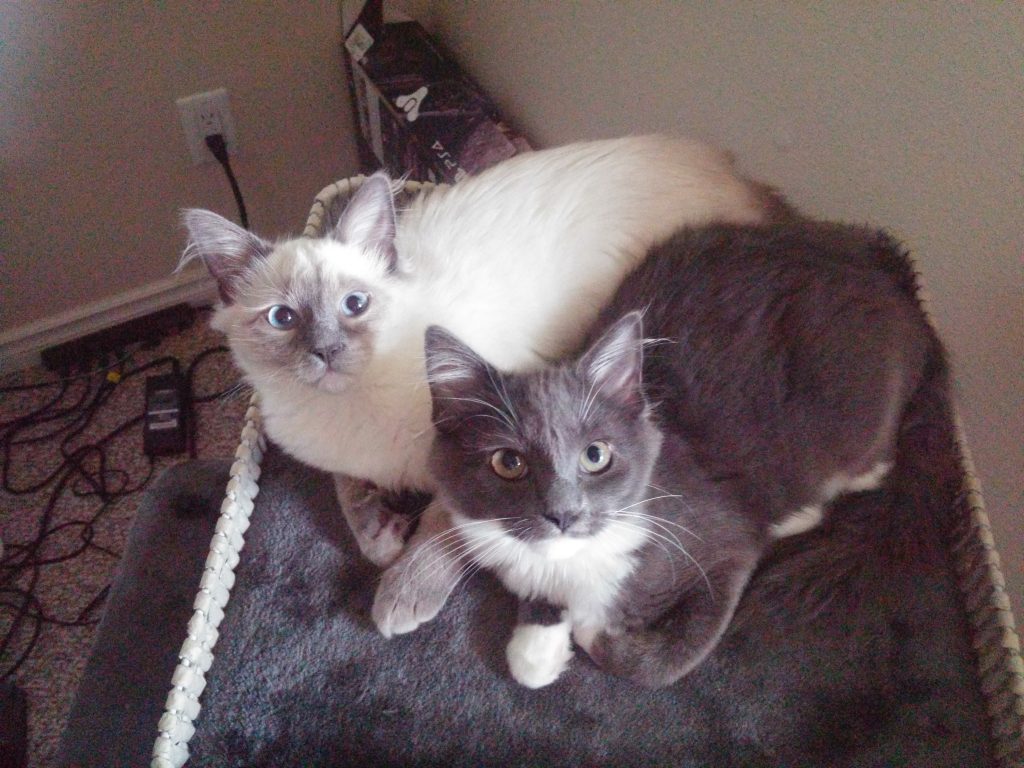 We have two female cats in our apartment named Lyle (lilac point) and Eeyore (grey). They were just a couple weeks old when we fostered them from the SPCA. Fostering turned into complete ownership within a couple days; who could ever give back something so cute? Even though they are sisters, having more than one cat in a confined space can lead to stress and conflict. Creating an environment for cats to express their natural exploratory and communicative (scratching, chewing, elimination) behaviors is key to reducing unhealthy behaviors such as excessive cleaning and stress induced anorexia. Equal opportunity for the cats is key to reducing conflict and stress. For our two cats we have two window perches and two litter boxes, but only one scratching post with a perch on top. The cats tend to battle over this single perch when they are playing with each other. They seem to divide the time in which they get to occupy the spot evenly throughout the day, though. High spots for the cats to rest and observe are important because these spots enable the cats to relax and feel safe while observing their environment. House cats and other species of feline all require safe places to observe their environments. Once we have more space we will get another perch for them. Scratching is an important behavior cats must also be able to exhibit in order for them to wear down their claws and prevent them from overgrowing into their foot pads. We have many cardboard things around the house for the cats to scratch and they do so regularly, especially before they get fed as a sort of ritualistic behavior. 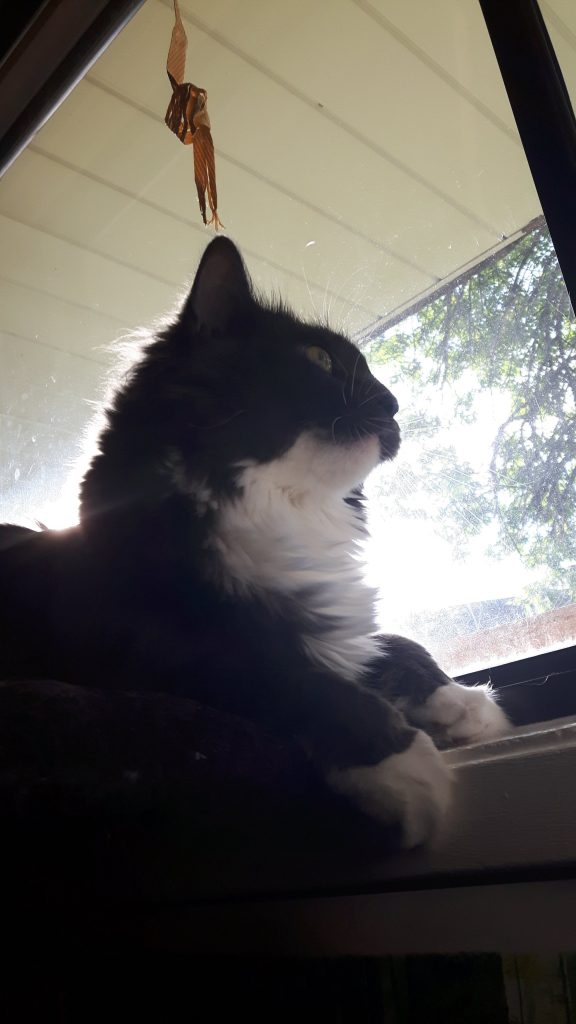 Any pet owner will tell you that their pets clearly have personalities and I am sure if you asked them, they would describe the nuances of each in a baby voice with endearing eyes. Personality is defined as consistent differences in behavior over time or across different environmental contexts. We observe differences in behavior between Lyle and Eeyore on a daily basis. Research has been done to better understand cat personalities in order to allow us to interpret their behaviors and enhance our ability to diagnose and treat harmful ones. When our two cats are up on their window perches looking outside, Eeyore is always captivated by the birds. Lyle on the other hand will notice the birds but quickly loose interest. If something scares them off the windowsills (a bird flies to close, people walk by… they’re easily scared) Eeyore will full on sprint to the spare bedroom where she hides underneath their couch (pictured in header). This is normal behavior cats display in their environment. They need to have an established safe space where they know they are protected and feel safe (for this reason we have had to carry around this terrible couch when we move…). Lyle on the other hand will only run a small distance and quickly regain the confidence to come check out the situation. These observations show that Eeyore displays a more cautious, introverted personality which contrasts perfectly with Lyle’s more careless and extroverted personality. These contrasting personalities are important for a healthy relationship between the two of them, as they balance each other out and rarely fight over space.

A deeper understanding of our pets behavior is key to providing them with the proper environment in which they can thrive. This is especially important with the domestic cat as it has been suggested that we keep our pet cats permanently indoors to prevent them from killing a billion birds each year. But that’s a discussion for next time.

This work by Grant W. Usick is licensed under a Creative Commons CC-BY Attribution 4.0 International License.

The Rat That Got Away!