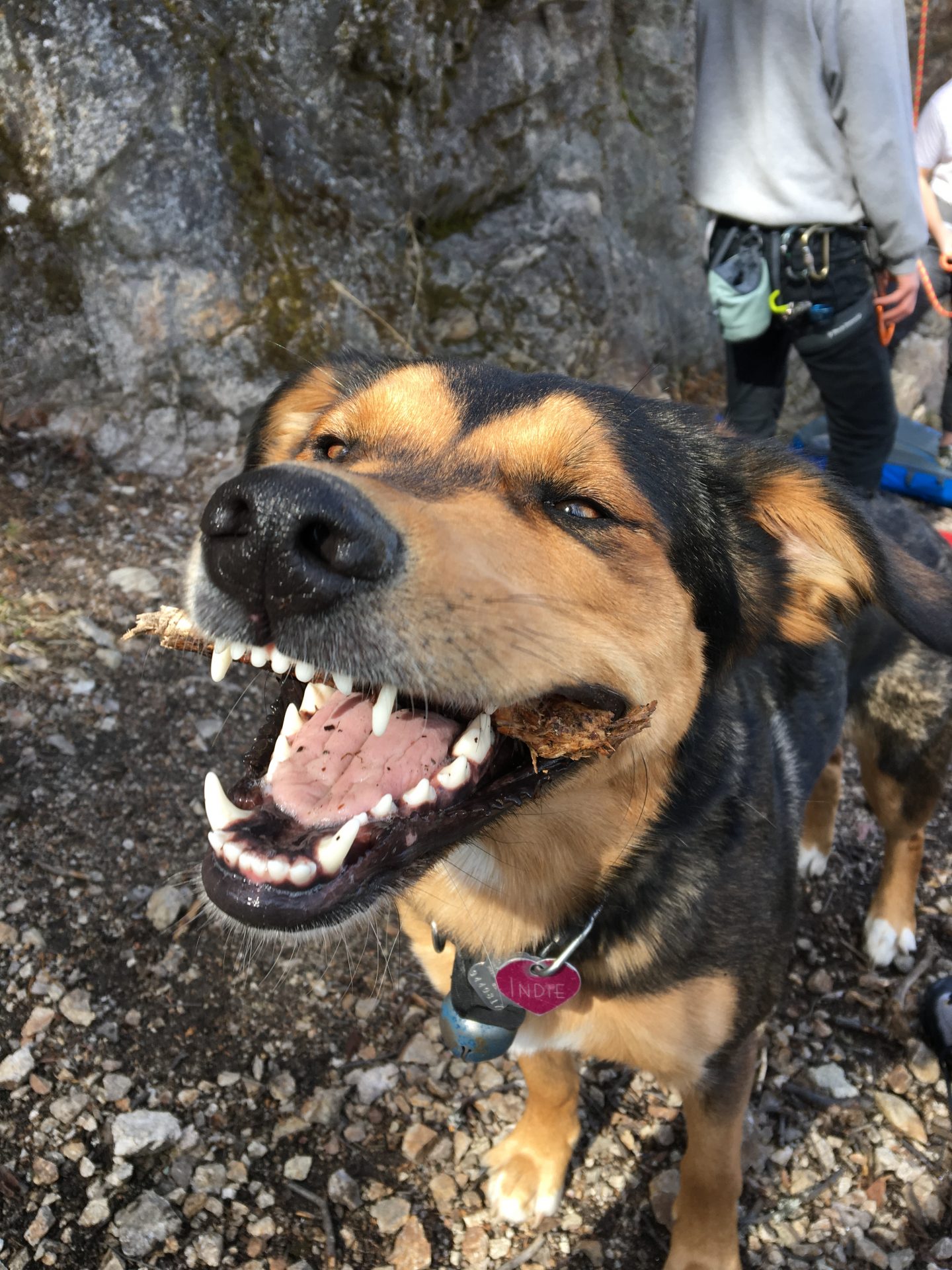 Look at this face. Who could say no to this face?

It is dinner time, and joining us this evening are two special guests: my friend and her dog Indie. Indie is a two year old mixed-breed, medium-sized dog. She visits our house frequently and is therefore fairly accustomed to its occupants and associated smells and sounds. When she first comes through the door she is extremely excited with little self-control. Her tail wags at speeds almost unobservable to the eye; she jumps and darts around between the two of us getting as much attention as possible. It is clear she has a positive and trusting relationship with us. She shows no fear of our house and settles down quickly as we begin to make dinner.

Like most dogs I have observed, Indie is always hungry. Today is the same as any other day as she soon realizes we are cooking food for dinner. She sniffs the air, locating where the food is and then promptly sits near the person who is cooking. She has learned through association that we control all food (hers and ours) and therefore whoever is standing the closest to the food is likely the person in control of distribution. She sits patiently yet alert, waiting for any scraps that may be coming her way. She seems to be very aware of the location of the food at any given point in time. She is quick to act when anything falls onto the floor, even if it isn’t actually edible. Luckily for us, she does first sniff anything before she consumes it which allows us time to intervene if it is something she shouldn’t eat. 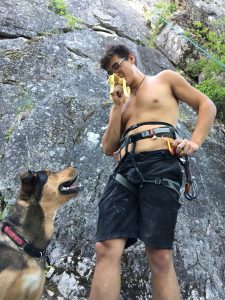 Some time has passed and Indie has remained close to the person cooking. With only a few pieces of lettuce left, we decide to give them to her. She obnoxiously eats the lettuce (it’s hard to eat apparently) all the while also looking up frequently, I assume to watch for better food opportunities. At one point, one person sits down on the couch to eat their dinner and Indie quickly abandons the lettuce to beg for food from them. When she is told “no”, she retreats back to the remaining lettuce on the floor. She continues to look up frequently while finishing the rest of the lettuce.

Now, as the rest of us settle in to eat dinner, I sit at the table, while the others sit on the couch. As suspected Indie follows the plates of food and sits in the living room, staring intently as they eat. A few minutes pass and no one has acknowledged her presence in front of them (although this is difficult because she sits very close), so she wanders back into the kitchen to sniff the floor for any crumbs. After she has checked the entire kitchen floor, she comes over to see me. I look down at her and shake my head, she seems to understand that this means I am not sharing and she then saunters back into the living room to check on the status of the two others. After sitting for a few minutes, she is given a piece of steak by one of them which she scarfs down quickly. Since she has now been rewarded for her begging behavior she moves a bit closer and sits down again, alternating her stare between the plate of food and their face. Learning of this type is known as operant conditioning.

When interacting with us she always seems to focus on our facial expressions, especially our eyes. She communicates with us based on observable features such as body position and eye contact and she has learned to associate certain facial expressions with our behaviors. This is demonstrated as we finish up dinner: one person clears all the plates and the on their way back to the living room, they bend down and stare at Indie with wide eyes and a wide stance.  She jumps up quickly, ready to play. She bounds around playing fighting with them. During this time, she looks mostly at their face, I’m assuming to continue gain information about their behavior. To end the play fighting and calm Indie down, they pet her gently and then stand up and walk away.

With no one to play with now, she searches around the house for her toy, a stuffed rabbit. When she finds it, she carries it with her head held high and seems to pick a random person to bring it to. She picks me this time and drops the toy in my lap along with her head and looks up at me. I interpret her look as innocent and playful; as if she is trying to guilt me into playing with her. It works. I grab the toy and toss it across the room. She runs, retrieves the toy and we repeat the process. At random, she switches between us. I am unsure as to why she would risk bringing the toy to another person if she is unsure if they will throw it for her rather tha bringing it back to the same person who reliably throws it. I hypothesize that she has learned to elicit a response from people with her facial expression and body language (head in the lap) and therefore people almost always throw the toy for her. 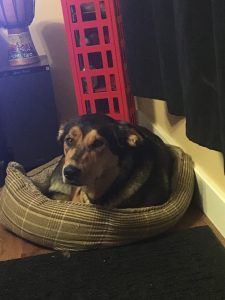 Indie laying on the floor in her dog bed while watching us (humans). Photo credit: Ashley Bradley, 2017

Eventually, she loses interest in the toy and after one final sniff around the kitchen and living room, she lays down. She does not sleep though, she is alert the entire time and closely watching us. She seems to be observing us to learn about our behavior in the same way I am watching her. Over the next hour she randomly switches between lying on the floor and approaching us, I assume for some attention. When it is time to finally go, she remains laying on the floor, watching closely until the door opens and her owner acknowledges she is ready to leave with a swift hand wave. She jumps up and runs out the door without even saying goodbye. She is on to the next adventure, the car ride home. Through repeated interactions with us, she has learned many different behaviors in which benefit her, such as obtaining food or playing fetch. I hypothesize these have been learned through operant conditioning. I believe this because she is positively rewarded when she behaves a certain way such as when begs for food by sitting closely and altering her gaze between the human’s eyes and the food. She also alters our behaviors by bringing a toy to us and then looking up in a way which elicits an emotional response from us, therefore resulting in us throwing the toy for her repeatedly.  it is clear that I am anthropomorphizing her behaviors so that I can relate to them and explain them. This emotional connection is why dogs are a mans best friend.

This work by Ashley Bradley is licensed under a Creative Commons CC-BY-NC-SA Attribution-NonCommercial-ShareAlike 4.0 International License.

The beginning of 2018 blog posts