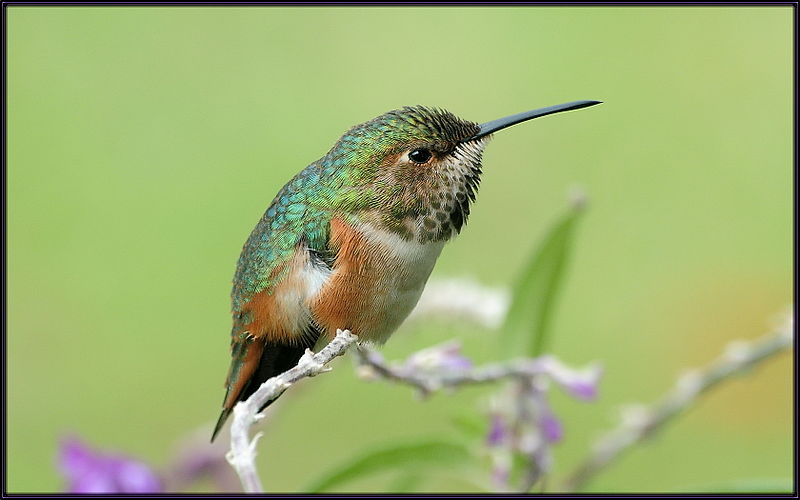 Blossom and Banji the Almost-Fledged Hummingbirds

A great way to observe wildlife without having to leave the comfort of your home is through an online webcam. Just find a webcam focusing on your species of interest to check up on it whenever you want. Remember, this is live footage; nothing is edited or specially selected, so you get a firsthand view of animal habits and behaviours. In this blog post I am going to share my observations of one of my favourite species: hummingbirds! Another great perk of using online cams is that there is often a background story on the individuals you are observing.

The particular hummingbirds I observed are Allen’s hummingbirds (Selasphorus sasin) nesting in La Verne, California. A webcam was set up to film the nesting period of Rosie the hummingbird, who returned to the same site where she hatched a few seasons ago. Her fledglings (Blossom and Banji) are three weeks of age and will be leaving their nest in the next few days. Rosie is part of the third generation nesting in the same ficus tree as her mother, Bella, did before her. 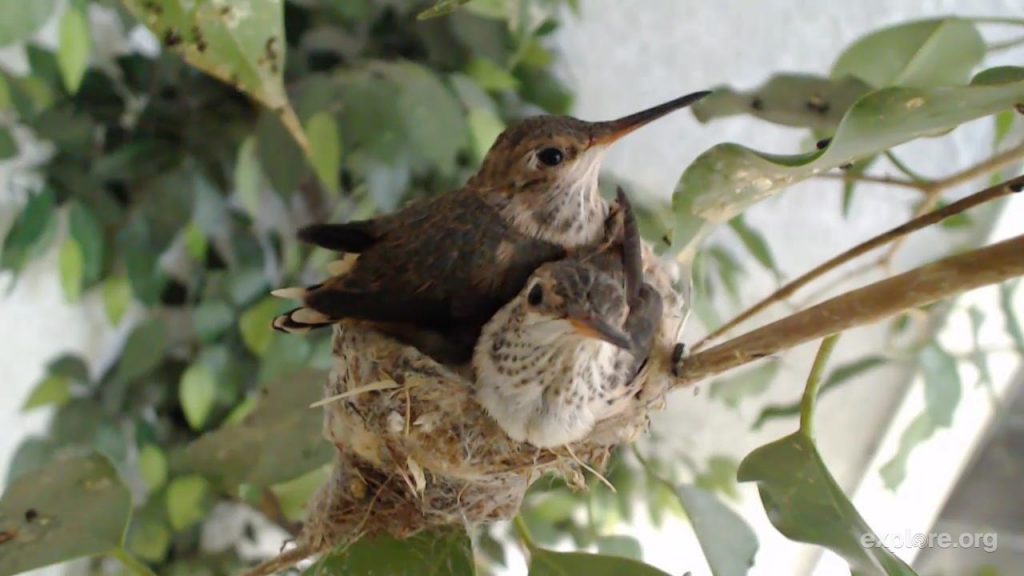 Blossom and Banji are already so big that they are nearly spilling out of their nest, which is about the size of half of a golf ball. The nest is built on a surprisingly exposed, thin branch. This nest building behaviour possibly evolved in order to prevent birds such as crows and ravens from being able to land in proximity to the nest, as hatchlings or eggs can be a food source. Gusts of wind continuously threatened to blow them out of their nest, upon which they would hold onto it with their claws and beat their wings to maintain their balance. They were constantly alert to their surroundings, looking around at any background noise such as cars starting or dogs barking. This shows how much our day to day routines can affect hidden wildlife without us even noticing.

Both fledglings were continuously flicking out their long tongues, as if tasting the air. Perhaps this was just a sign of hunger, or they were instinctively practicing how to extract nectar from flowers. They were very restless, constantly stretching and shifting around the nest. At 10-20 minute intervals, a fledgling would start beating it’s wings as if trying to fly, but was not yet able to lift off. The second nestling would often follow suit, as if learning from its sibling. This behaviour likely developed to strengthen the fledgling’s flight muscles for when they are ready to leave the nest, as well as to continually test if they are able to become airborne.

Rosie came to the nest every 15-20 minutes to feed Blossom and Banji. Upon her arrival, they raised their heads and opened their beaks in anticipation of food. Rosie stuck her beak down each fledgling’s throat in turn, where she regurgitated a mixture of nectar and insects. She spent about thirty seconds feeding them and then left in search of more food. Both fledglings were fed for equal amounts of time and appeared to be the same size as a result of this. Between feeding sessions, Blossom and Banji rested with their beaks raised up, as if constantly ready to receive food. Rosie always approached the nest from the same direction, indicating that she may have an established flower patch or area that she repeatedly goes to as a food source. Surprisingly, Rosie continued going on food forages until after dusk, perhaps to catch gnats which are particularly active at that time and constitute a large portion of a hummingbird’s protein intake.

A fascinating behaviour that I observed is that hummingbirds are instinctively potty trained! In order to keep their nest clean, which in turn reduces parasites in the nest, the fledglings stepped backwards and raised their rear ends over the edge of the nest to let their droppings fall outside the nest. This behaviour is common in birds of all kinds and I have previously observed it in baby pigeons. For additional cleanliness, Blossom and Banji preened themselves regularly. This may seem like a difficult task considering their long beaks, but they seemed to have mastered the skill quite well.

Within the next few days Blossom and Banji will leave their nest for the first time. However, Rosie will continue to feed them for another two weeks as they reside near their nest before they start feeding on their own. They will then leave their nest area in search of their own territory, but perhaps Blossom will return next year to continue the family tradition of nesting in this particular ficus tree.

This work by Lena Richter is licensed under a Creative Commons CC-BY Attribution 4.0 International License.