A Glimpse into the Creation of Cuteness

Reproduction is a lengthy and energy consuming process. Copulation, egg laying, incubation, and feeding are just a few of the energy requirements and parental responsibilities of birds associated with reproduction. This amounts to a lot of time and energy expended on the creation and development of offspring, even ones that do not survive. Though an individual’s reproductive success is often associated with their fitness, I still wonder if it is worth all that work. Seeing the smug looks on these hatchlings faces sways me momentarily to believe it might be.

Bald eagles are majestic birds of prey. Their white head and tail feathers contrast their brown body making for a striking image. Distributed throughout North America, bald eagles can be seen regularly preying on wild salmon or perched roadside on a tree.

I accessed a webcam through expore.org that follows a pair of breeding bald eagles on Santa Cruz Island, the largest island in Channel Island National Park, off the coast of southern California. Both male and female in a breeding pair will incubate the eggs, tagging each other out as needed. During the period I was observing the nest only one parent was present. After watching this eagle, unsure if it is the male or female in the pair, incubate his/her eggs for only a meager 40 min a cycle of behavior was already forming. I saw this cycle repeated twice over the short viewing period.

To an unskilled observer it may appear that the eagle, who I will refer to as Brenda, is lazy and is relaxing in a nest. However, on closer examination it appears that Brenda is panting. How can this be? She is just laying down and doesn’t appear to physically be exerting herself. Though the drool slowly dripping off her beak confirms she is panting. The frequent chest movement also suggests she is breathing heavy and frequently.  The prolonged exposure to the sun likely warmed Brenda above the incubation temperature she is trying to maintain so pants to cool herself. In extremely high temperatures birds can do specialized form of panting called gular fluttering. Brenda may have been fluttering her gular as she did appear to be panting rapidly but I can not be certain. 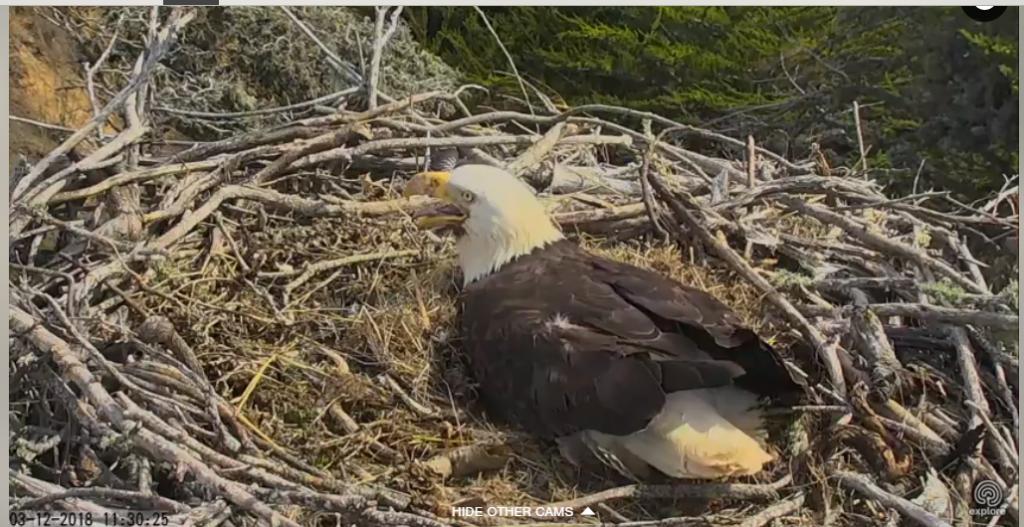 After minutes of sitting and panting Brenda would eventually stand up and look down at her eggs. She would alternate looking at her eggs and looking at her surrounding, always watching for predators. Though I was unable to see exactly what she did to her eggs I can guess that she would turn them. Egg turning prevents egg membranes from sticking together and is important in early embryo development though still done occasionally later in the incubation period. Following this was what appeared to be big stretch. After sitting for so long she may have needed a good stretch, but I am likely anthropomorphizing. 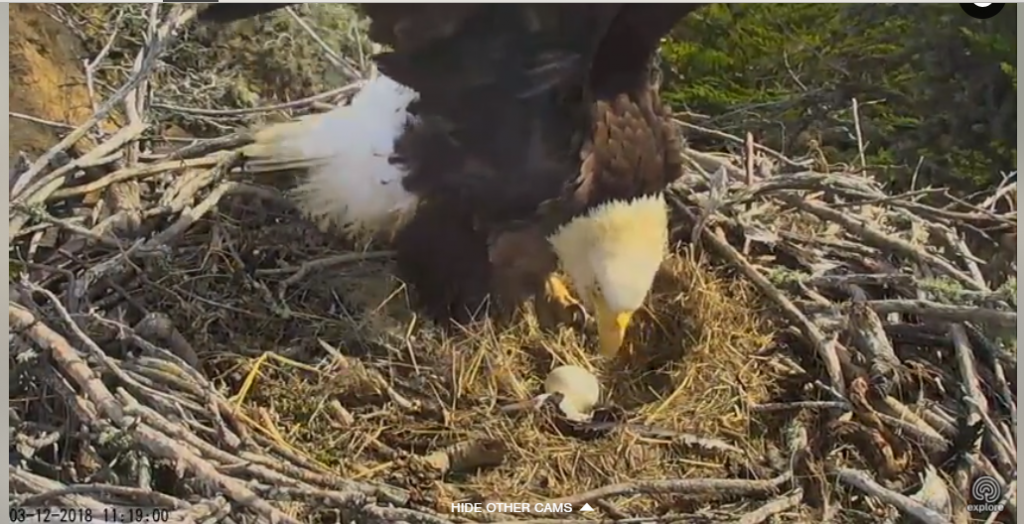 Laying down on her eggs in a different direction now Brenda begins to move some of her nest material around her body. I originally thought she was trying to provide more protection from the wind but following some research I found that she is creating a nest cup. Satisfied with the work she has done Brenda resumes watching the area around her for potential dangers. Shortly after the panting begins again. This cycle occurred twice with few deviations and I image would continue to happen until she is relieved by her partner. 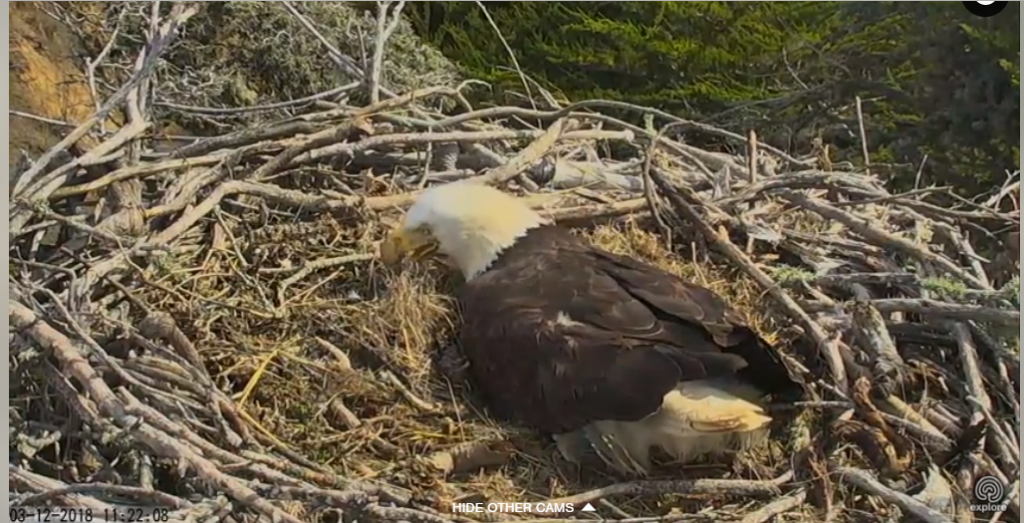 Breeding eagles sacrifice a lot to provide the best possible start for their offspring. From lower food consumption to increased predation risk to plucking out their own feathers to create a brood patch, bald eagles clearly have something driving them to continue to reproduce. After all the parents have expended they must feel some form of attachment. I wonder if they look at their newly hatched offspring and think they are ‘adorable’ or that it ‘has the fathers nose’ and when it takes its first step or learns to fly do they feel a sense of pride? Do they feel it was all worth it?

This work by Nina Grigat is licensed under a Creative Commons CC-BY Attribution 4.0 International License.