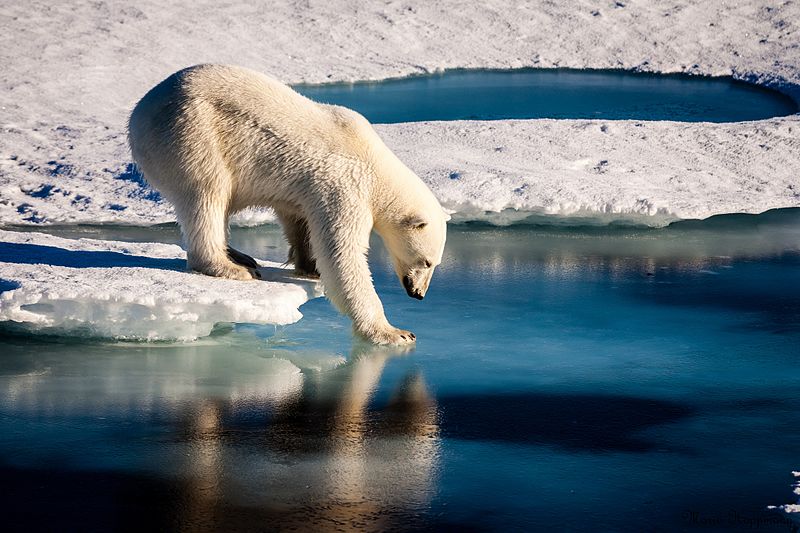 The largest bear in the world and the Arctic’s top predator, polar bears (Ursus maritimus) are a keystone species in the Arctic. Polar bears evolved to live on sea ice in Canada, the United States, Greenland, Norway, and Russia.  They have been divided into 19 sub-populations for monitoring management purposes. The ice is their platform to move and hunt, but also where they mate and raise their cubs. It is also an essential habitat for their primary prey, seals because they are high in fat and protein for polar bears to sustain during winter and use for energy during summer. With the climate warming, the sea ice is melting, thus forcing the bears to quickly come ashore and not get the optimal forage that they need to survive.

They have been listed as species of Special Concerns under the federal Species at Risk Act (SARA) in 2011 and has been listed as vulnerable species in 2008 by the International Union for Conservation of Nature (IUCN) in 2008. This species population is declining rapidly due to oil and gas development, increased shipping, hunting and poaching, research impacts, diseases and parasite, competition and climate change. I will focus more on how the climate change affects the polar bear’s behaviors.

Polar bears are adapting to their new and changing environments. Researchers have seen 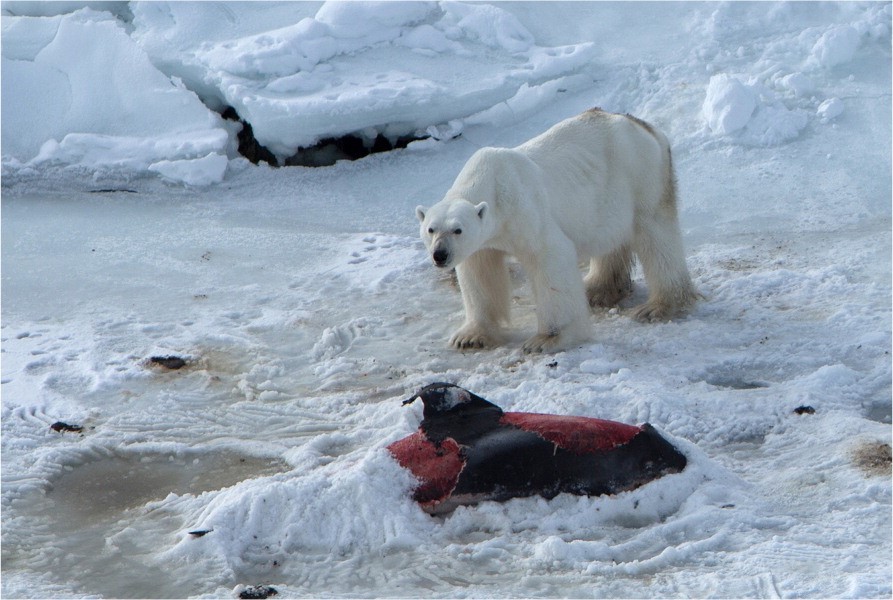 some unusual behaviors of polar bears. They have found that polar bears are eating dolphins and freezing the leftovers for later at Svalbard, Norway. This behavior is unusual because polar bears tend to prey on seals, but with climate change and the need for sustenance, they are able to hunt for dolphins as well. Dolphin citing in the area was unusual, and the explanation for this was that the water was warm, and so the pods of the dolphins were trapped when a strong northerly wind had pushed them out of open water.

Another way polar bears are adapting to the loss of sea ice is that they are eating snow goose eggs for nutrition. Geese are migratory birds and they come to Canada to breed every year, with each clutch containing four eggs. Polar bears come ashore earlier than expected and prey on goose eggs. Rockwell says that it will take 88 goose eggs to equal the caloric equivalent of 1 seal. Rockwell and colleagues found that the geese are considered as species of least concern because they have a wide range and population that is increasing. Bear and goose encounter will also have mismatched years, so the goose population has the time to reset its population. 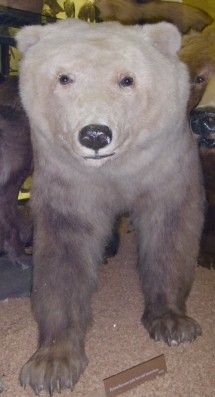 Polar Bear and Grizzly Bear hybrid, also known as pizzly or grolar bear. Taken by S. Hartwell (Messybeast) (CC BY-SA 3.0)  With climate change, polar bears are unable to hibernate. With climate warming, they cannot slow their metabolism down because they do not have sufficient nutrients from the winter season, as the ice sheets were melting sufficiently and they are coming ashore earlier. With them not being able to hunt for food during winter and have to scavenge during summer for survival, they are forced to wander in towns where food and waste are kept. In 2014, the town of Arviat, Nunavut, Canada, had to cancel regular Halloween regimes and hold it indoors, because they are concerned the children will encounter a polar bear and be at risk for being attacked.

With climate changes, polar bears and grizzly bears are able to encounter one another and mate, creating a polar-grizzly hybrid called pizzly, grolar or nanulaks. The two species of bears usually avoid each other in the wild, because of the two different climates they prefer, but with snow and ice melting rapidly, grizzly bears are able to travel up north and polar bears are being forced south due to habitat degradation. First generation hybrids have the ratio of 50% grizzly and 50% polar bear, but further breeding can result in the reduction of polar bear genes. We are now starting to see that the Canadian Arctic is ¾ grizzlies.

There has been a lot of management plan for conserving polar bears; U.S. Fish and Wildlife Service, Inuvialuit Settlement Region Polar Bear Joint Management Plan, Environment and Climate Change Canada, and many more. These management plans should help guarantee that the polar bear population is maintained or increased, as it is an important species for Aboriginals for traditional usage for sustenance and other necessities such as clothing, mattresses, and tools. It has been of their history and would want to pass it along younger generations.

This work by Misato Kondo is licensed under a Creative Commons CC-BY-NC Attribution-NonCommercial 4.0 International License.