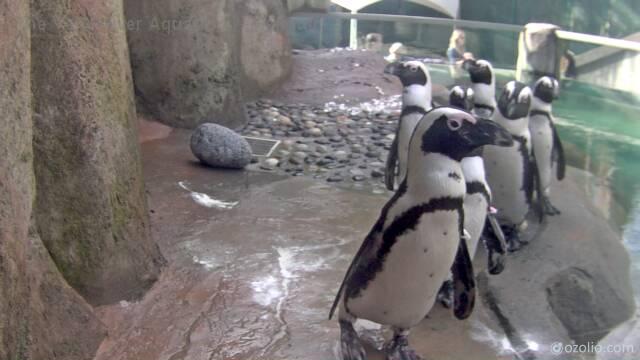 Group of penguins wandering in front of the camera. Photo Captured via webcam by Author

The african penguin (Spheniscus demersus) goes by several names including the black footed, and the jackass penguin. As the name would suggest, these birds are generally found around the southern tip of Africa. Whether it is the fact that they look like they are always wearing a little tuxedo, or the way they go from awkward waddling on land to being incredibly graceful and beautiful underwater water, penguins have always been an animal I was fascinated by.

Despite the freezing winter we had in Prince George I was unable to find any penguins wandering along the shore of the Nechako river. Instead I had to settle for a live stream webcam of the penguins at the Vancouver Aquarium. I began watching the stream around noon hoping that the penguins would be more lively around midday. And as cute as sleeping penguins may be, I thought this would also give me the least chance of watching an hour of penguins sleeping. While I guessed right in terms of all of the penguins being awake, or at least all of the penguins on camera, the penguins were not the most entertaining of animals to observe. Watching the penguins standing together in a group of about 5 looking around intently but not doing much else, I was reminded of the penguins from the Dreamworks movie Madagascar, the penguins simply looked innocent to disguise what they were really upto. And while the penguins in Vancouver were not hatching a plot to escape from the zoo (as far as I know), by looking closer I was able to see some interesting behaviours among the birds.

Group of penguins wandering in front of the camera. Photo Captured via webcam by Author

The most common activity among the birds was that they were constantly preening themselves. At first I thought they were simply scratching themselves, but was curious about why they always started close to their tail and then moved to different areas. Upon future research I found out that penguins have a gland which secretes oils that help penguins, with waterproofing, smoothing, and cleaning their feathers. Not only were the birds preening themselves, but they would also help each other with getting the difficult to reach spots such as their necks and heads. Social grooming was not something that I often consider when I think of birds, so it was interesting to see it occurring. I am not surprised to see social behaviour among these penguins as they rarely did anything alone. When one penguin would start wandering along their little beach the rest of the group would follow close behind. 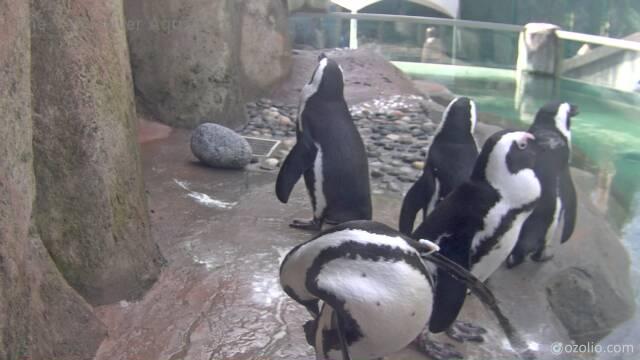 Another interesting behaviour which I noticed was the penguins opening their mouth extremely wide. There was no sound to the video so I was not sure if they were making any sort of call or if it was simply the birds yawning as us humans so often do after a long of working hard. I looked into this behaviour and came to the conclusion that they were likely performing the call that gives them their nickname of the jackass penguin. These penguins make a call which sounds similar to that of a donkey. While there are several uses for this call, I believe they were most likely trying to communicate with their mates as it is common for them to call out if their mate is in the water and they cannot find them.

The most unique behaviour that I saw while watching the birds was a pair being to lash out at each other with their beaks and wings. The fight started extremely quickly without any warning, lasted for a few seconds, and then both birds stopped and went back to whatever they were doing before. While I could find nothing describing why these penguins tend to fight, there were pages which mention it is not uncommon for penguins to fight each other.

Overall I thought it was an interesting experience watching an animal and trying to pick up on these subtle behaviours which they display. I’m curious how much of what I observed would change if these penguins were in the wild, as I am sure wild penguins would be facing much different conditions. I plan on following up on this activity and checking up on the penguins at different times of the day just to see how their behaviours change at different times. Particularly I want to see how they act around feeding times and if they still act as one big cohesive unit or if there is some form of pecking order (pardon the bird pun) among them. We watch different species of animals everyday but we never seem to consider what is beneath those behaviors. Even with humans, we see what they do or how they act, but we rarely consider the why?.

This work by Josh Fouillard is licensed under a Creative Commons CC-BY Attribution 4.0 International License.