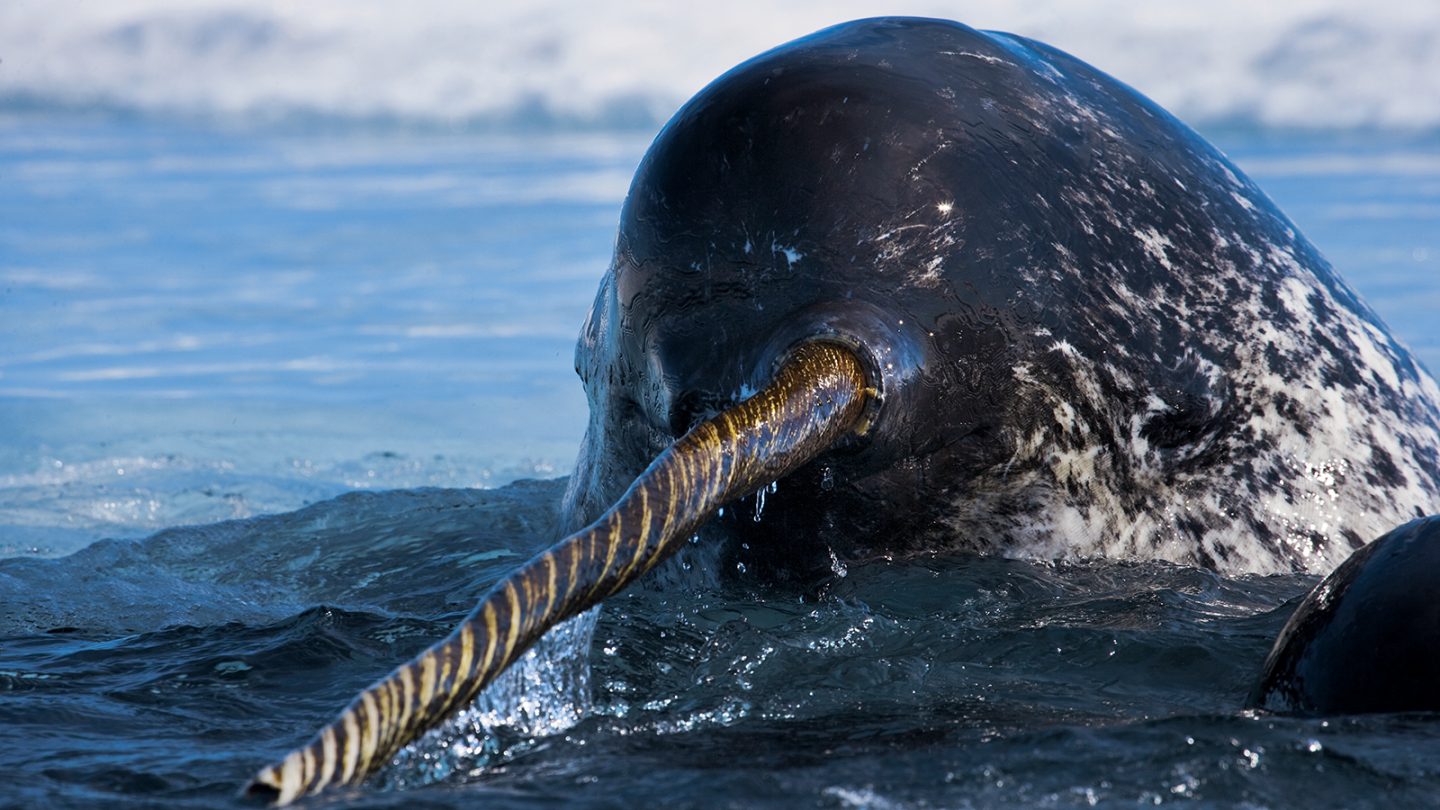 A narwhal wielding its broken tusk as it catches a breath.

Long before European settlement, the Inuit people of the Canadian arctic witnessed the making of a creature…

An Inuit woman was persuaded by her cruel son to tie a harpoon rope around her stomach. Knowing the rope was tied, the son threw the harpoon; striking a whale and immediately dragging his mother into the depths of the ocean. There, under the dark and frozen water, her hair became tangled among the harpoon rope and her body was transformed into the body of the whale that the son had taken. Thus was born the narwhal: a beautiful creature with a large tusk protruding from its skull and a name that translates to “corpse whale.” 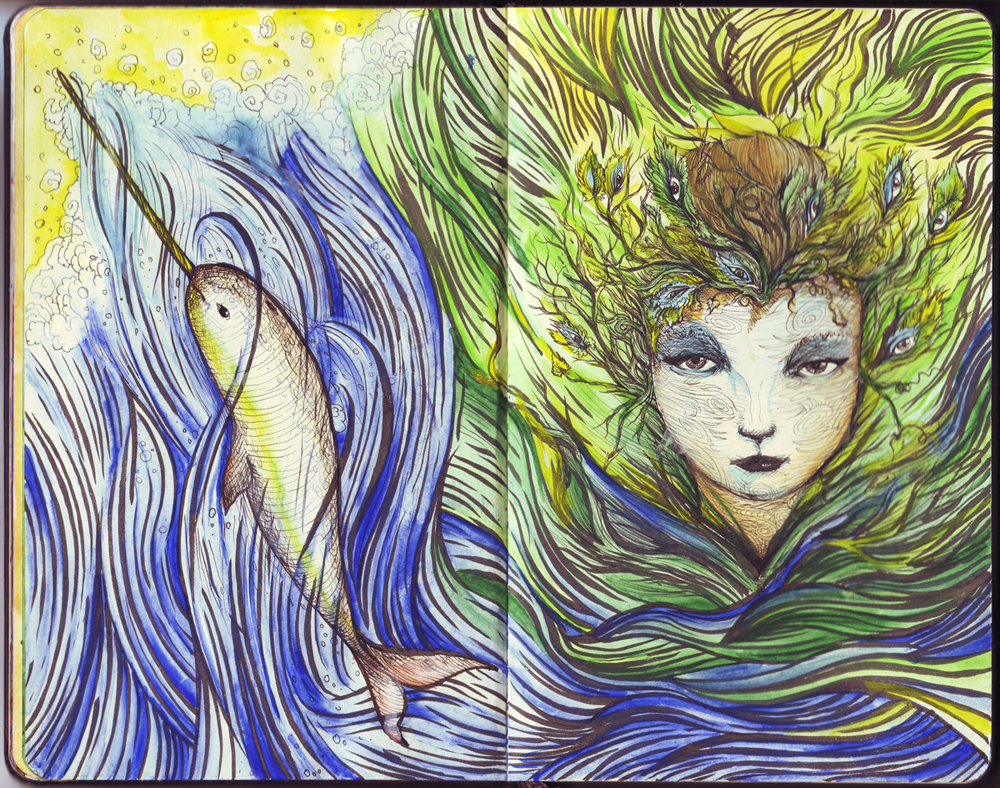 Today the narwhal (Monodon monoceros) is known as a medium sized whale that belongs to the same family as the beluga whale (Monodontidae). Narwhals can range in body size from 4 to 6 meters, weigh up to 3500 lbs, and are generally found within Canadian and Russian arctic waters (Jefferson et al. 2012). Males possess a modified tooth, which protrudes up to 3 meters and is referred to as a helical tusk. The function of the tusk is not specifically known, although speculation suggests it may serve sensory functions, advantages in reproductive competition, and intraspecific communication (Jefferson et al. 2012).  Narwhals exhibit seasonal migration, moving closer to coastlines in summer months, and further offshore under deep ice packs in the winter. Narwhals will dive for around 25 minutes and will surface within narrow cracks in the ice to breathe (Williams et al. 2010).

Ever since the legendary creation of the narwhal, it has remained of cultural importance to the Inuit people, providing a source of food and income. The skin of the narwhal is eaten both raw and boiled, and the narwhal’s highly prized tusks are carved and sold by the Inuit people to support their communities (World Wildlife Fund 2016). In addition to their strong cultural bonds, the narwhal is also a vital component of the arctic ecosystem. Being one of the top organisms in the arctic food chain, it can indicate important components of ecosystem health (Cosimo 2006). Narwhals are strongly connected to sea ice, and therefore suggest impacts of climate change on the marine environment (World Wildlife Fund 2016). The level of sea ice can impact predation on narwhals, as killer whales are able to travel further north and there is less ice cover for narwhals to hide under (Higdon and Ferguson 2010). Ice level can also impact prey species populations for narwhals, and can even increase the risk of ice entrapment (which occurs when sudden shifts in wind temperatures freeze cracks in the ice and lead to individuals being trapped within small ice openings) (Parliament of Canada 2008). Since escape routes are frozen over, these animals often die (Laidre et al. 2011). These ties indicate that narwhals are indicative of arctic ecosystem health, and essential factors of the environment can be inferred from narwhal status.

In 1996, the narwhal was assessed by the IUCN and the status given was data deficient, meaning that not enough information was known about the species to properly rank it based on conservation criteria. As of 2008, the narwhal has been listen as near threatened, yet the level of uncertainty around this species is still substantial (Jefferson et al. 2012). The global population is estimated around 80 000 individuals but current population trends are unknown, including mortality levels. The largest threats to this species are hunting for food and ivory, climate change impacts, oil and gas exploration, and increased shipping traffic (Jefferson et al. 2012). All these factors influence the behaviour of the species and add pressures to conservation efforts.

Narwhals are a skittish species (Richardson and Würsig 1997), and are known to disappear when boats or shipping vessels are nearby. With increased oil and gas exploration, shipping in sensitive areas has also increased. This suggests greater noise pollution will be present that may startle the whales and interfere with species communications. Disruption in communications can lead to collisions with other animals (especially whales), and increases in shipping will also increase pollution levels and risk of fuel or oil spills.

Furthermore, one study demonstrated costly effects of seismic airgun noise on narwhals. Observers on seismic vessels rarely spot narwhals, even in areas where they were known to be, indicating that the whales had swam away before the vessel had approached (Heide-Jørgensen et al. 2013). It was found that the low frequency airguns were able to transmit sound long distances (3000km away) and that the airgun pulses used in the study would have ensonified most of the northern part of Baffin Bay during the narwhal fall migration(Heide-Jørgensen et al. 2013). During this time, narwhals would have been within 200km of the transmitting vessel. Evidence suggested changes to the narwhal migration pattern, which may lead to summer ground abandonment, and even the return to wintering sites-where narwhals are met with challenging ice conditions and risk of entrapment (Heide-Jørgensen et al. 2013).

Unfortunately, narwhals show little capability of adapting to such disturbances, and therefore retreating to “safer” ground may be their only option when disruptions occur (Williams et al. 2010). Alterations to their swimming and diving behaviour seem unlikely, and therefore the whales are left with little choice than to alter their basic annual cycle (Williams et al. 2010). Narwhals are not the fastest of swimmers, with average speeds of only 1 m/s, and therefore rely on heavy ice packs to hide them from predators (Jefferson et al. 2012). As greenhouse gas concentrations increase, the sea ice of the arctic has suffered, and will continue a negative trajectory unless climate change patterns are altered. Seasonal and perennial melt in the arctic have shifted from a 2.6% decline per decade in 1979–1996, to 10.8% decline from 1996-2006 (Comiso et al. 2008). Evidence suggests that while winter ice packs have been surprisingly more stable than predicted, warming from greenhouse gas emissions are still causing significant ice retreat during the winter months (Comiso 2006). Consequently, the winter ice that narwhals rely on for protection from predators is decreasing each year. Not only are predators able to venture further north due to warmer temperatures and less obstacles (e.g. killer whales), but there is less ice to conceal narwhals from these predators when they arrive (World Wildlife Fund 2016).

Ferguson et al. (2010) documented killer whales sightings in Hudson Bay, Hudson Strait, and Foxe Basin; locations where killer whales have not historically been witnessed due to restricting sea ice. In addition, they suggested that further openings will become available as sea ice continues to retreat and killer whales will be able to exploit resources further north. Killer whales are known as top predators within ecosystems and may inflict trophic cascades within arctic systems as they are introduced to newer habitat (Ferguson et al. 2010). These interactions impact marine predator-prey interactions, and may even increase societal threats on operations such as commercial whaling (Ferguson et al. 2010).

Narwhals are able to dive up to 1400 meters to find prey items (Jefferson et al. 2012). Their winter diet consists of mainly Greenland halibut and polar cod; both of which are species highly susceptible to climate change and sea ice cover (Parliament of Canada 2008). Spring and summer sea ice melt affects the amount of algae present at the ice edge, which subsequently affects populations of krill, the main diet of narwhal prey species (Parliament of Canada 2008). Subtle shifts in the ice cover have cascading effects on the ecosystem’s food web. Narwhals may have to search harder to find nourishment as prey species’ food becomes less abundant.

The consequences of human impacts on the narwhal are highly diverse and ever expanding. A high degree of uncertainty is associated with the conservation of this species, suggesting even more threats are present than currently known. However, it is apparent that narwhals are facing definite indirect and direct threats associated with global anthropologic dominance. Climate change pressures affect narwhals within their ecosystems from both the top-down and the bottom-up by altering the populations of prey species and changing the dynamics of predator habitat. In addition, human impacts have been documented suggesting narwhals alter their behaviour in response to human presence and noise pollution. These changes put narwhals at greater risk of death and may lead to increased conservation concern in the near future. While the narwhal is only listed as near threatened, cumulative impacts associated with the variety of threats facing this species may quickly escalate and more substantial conservation measures may be required. It will be important to keep a close watch on this species and continue arctic research as this ecosystem has shown great fluctuation within the last few decades, and narwhals may be quick to suffer population decline.

This work by Hayley Scott is licensed under a Creative Commons CC-BY Attribution 4.0 International License.

Pesticides effecting Animal Behavior: No One Saw That Coming… except they did.